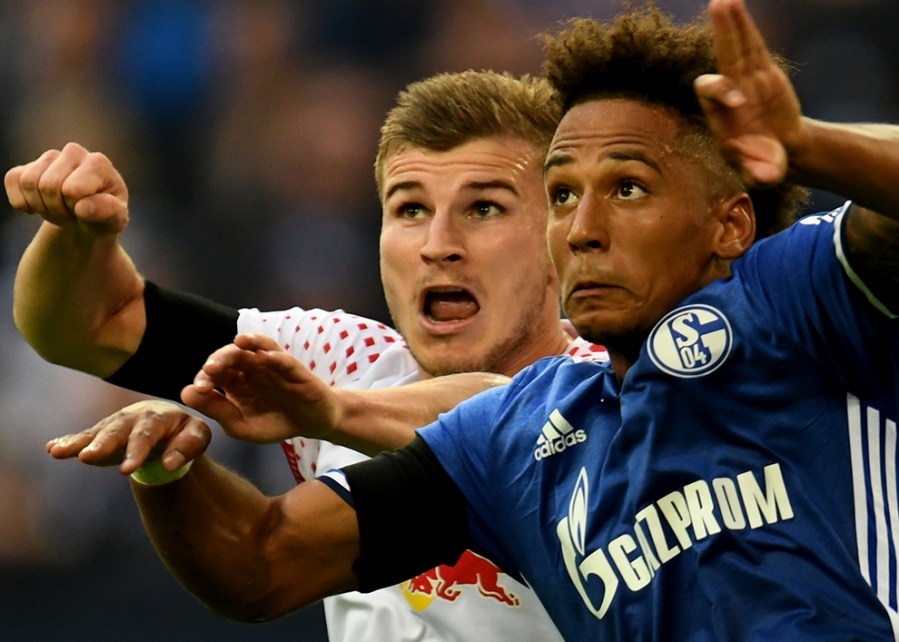 Last season, Schalke took six matches to register their first Bundesliga win. This time, though, the Royal Blues proved much more explosive out of the blocks, kicking off the 2017-18 campaign with an outstanding 2-0 home win over reigning runners-up RB Leipzig.
In his first match in charge in the top-flight, 31-year-old Schalke boss Domenico Tedesco already looks to be pressing all the right buttons. Taking their cues from a 3-4-2-1 system built around a midfield diamond, every player was tactically on message, defensively they were rock solid and and were extremely sharp and resourceful on the counter-attack.
Normally masters of hitting on the break, the Leipziger had to endure an afternoon of role reversal at the Veltins-Arena, where the hosts produced a pitch-perfect catenaccio performance. Despite dominating in the possession stakes, RB invariably found themselves crowded out in the final-third and whenever Schalke won the ball back, they were immediately incisive.
From back to front, this was a masterclass of a display from the Gelsenkirchener. Collectively fined-tuned and with a string of individuals bang in form, not least the busy and creative Algerian midfielder Nabil Bentaleb – who opened the scoring via the penalty spot just before half-time – the entire back three (youngster Thilo Kehrer, Brazilian veteran Naldo and the Serb Matja Nastasic), newly-acquired French ball-artist Amine Harit and lone striker Franco Di Santo, who only started because of an eleventh-hour injury to first-choice centre-forward Guido Burgstaller.
Winger Yevhen Konoplyanka, the scorer of Schalke’s second goal, was another to cut a hugely impressive figure. After a thoroughly disappointing first season with Schalke in 2016-17 – totally lacking in confidence and having a habit of never tracking back – the Ukraine international was widely-expected to leave the Ruhr this summer. But Tedesco clearly liked what he saw, quickly identifying the ex-Dnipro and Sevilla wide-man as his resident counter-puncher.
Besides his strategic know-how and communication skills, Tedesco also brings single-mindedness to the table. He is not one to fear a tough call and certainly took one when opting to take the captain’s armband from German World Cup-winning defender Benedikt Höwedes.
The decision to make keeper Ralf Fahrmann the new Schalke skipper has generated no end of heat and light in the local media. Team captain for the past half-dozen years, academy graduate Howedes is a cult hero on the terraces in these parts. A true blue standard bearer: loyal, reliable, wholehearted.
Capped 44 times for the Nationalmannschaft, Howedes did not make the starting line-up for the RB Leipzig game and inevitably questions are now being asked about his future.
“No one can have a first team place guaranteed here,” declared Tedesco. “That doesn’t only apply to Benedikt. We have to foster heathy competition within the squad.”
The new boss has spoken. No free passes, no special treatment, no excuses.
What We Learned This Week
1. Instant replay arrives.
The 51st minute of Bayern Munich 3-1 home win against Leverkusen was a landmark moment for the Bundesliga – the first-ever decisive intervention of a video official. On seeing Bayern striker Robert Lewandowski go down in the box under challenge from Charles Aranguiz, match referee Tobias Stieler initially let play go on. Then reversed his decision following an ‘eye in the sky’ review, the spot-kick duly being converted by Lewandowski.
2. Next time, a handshake will do.
No more extravagant goalscoring celebrations for Hamburg forward Nicolai Muller. After netting the winner in against Augsburg on Saturday, the 29-year-old unwisely attempted a complicated gymnastic manoeuvre, colliding with the corner flag and eventually being carried off. The net result? Ruptured cruciate ligaments in his right knee and seven long months out. Ironically Muller had been angling for a move all summer and was rumoured to be in contact with Wolfsburg.