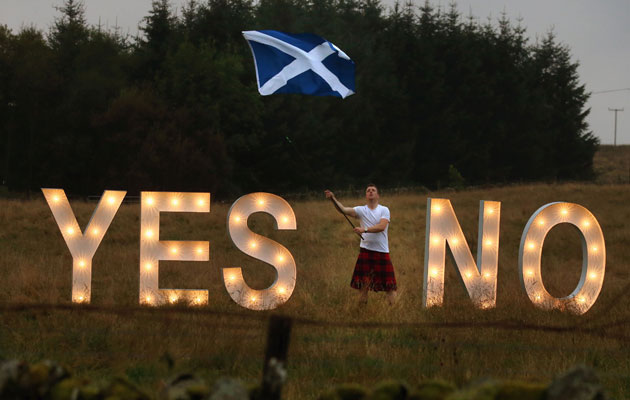 The long-time goal of Celtic and Rangers to share, one fine day, in the largesse of the English Premier League will vanish forever if Scotland votes tomorrow for independence from the rest of the United Kingdom.

For decades the thoughts of the Old Firm have turned time and again to the possibility of abandoning the financial constraints of the Scottish game to join the English league pyramid, taking up the ‘Welsh option’ enjoyed down the years by the likes of Cardiff City, Swansea City & Co.

While Scotland remains a constituent part of the United Kingdom of Great Britain and Northern Ireland that remains a possibility, albeit a far-distant one. If the referendum vote tomorrow ends up in the favour of the Yes campaign rather than Better Together then it’s all over.

The issue of the Old Firm moving south was raised most recently by Fergus McCann, the businessman who rescued Celtic from the brink of collapse. Now, of course, it is Rangers who are enduring their ownership and financial travails as they battle back up through the divisions.

It is not expected that an independent Scotland would have difficulty within the football family since the Scottish Football Association is already an entrenched member of world federation FIFA and European body UEFA.

However problems might be raised by other nations – Spain, Russia, for example – which have domestic political reasons for opposing separation movements. If they insisted the SFA re-applied for memberships on behalf of a new, independent nation, then Scottish teams could be frozen out international competitive football for some years.

The immediate Olympic path for an independent Scotland is also uncertain. Sir Craig Reedie, Britain’s Scottish vice-president of the IOC, has noted that the political timeline means Scottish competitors aiming for the Rio 2016 Games would not be able to compete under the saltire but, most likely, under the IOC flag.

At least Scotland would not need to fret any more about their independent football status if they compete one day – in Tokyo in 2020? – in the Olympic football tournament.