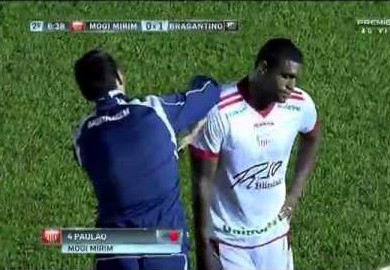 A referee in Brazil took pedanrty to a new level when he dismissed a player in Brazil’s second division for wearing the wrong shirt number.

Serie B side Mogi Mirim suffered a 3-2 defeat to Bragantino on Tuesday, btu their cause was not helped by the red card shown to defender Paulao.

Having worn his usual No 4 shirt in the first half, Paulao returned for the second sporting the No 3 shirt – that of his team-mate Fabio Sanches. The referee issued a second yellow card to Paulao after the fourth official notified him of the error.

Would a quick word in the player’s ear requesting him to swap shirts have been a more reasonable solution to the problem? One would have thpught so.