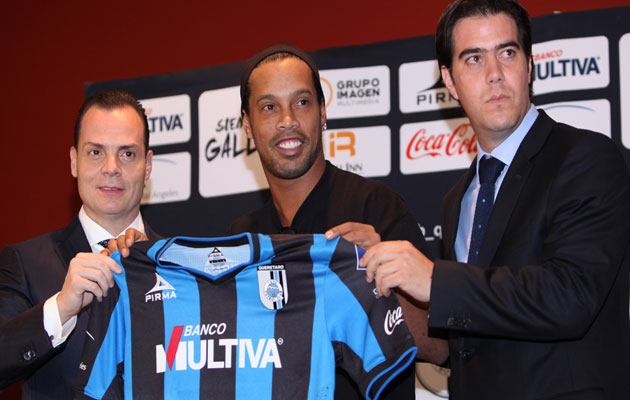 Mexican politician, Carlos Trevino, has allegedly called Brazil legend, Ronaldinho, a ‘monkey’ after he got caught in traffic caused by Ronaldinho’s presentation in Querétaro’s match against Puebla.

“I try to be tolerant but I DETEST FOOTBALL and the dumbing down phenomenon it produces,” Treviño wrote.

“I detest it all the more because people obstruct and flood the main avenues, causing me to spend two hours getting home … and all to see AN APE … A Brazilian, but an ape nonetheless. This has become a ridiculous circus.”

The post was deleted, but by then it was too late as it had been picked up by local media. The hashtags #TodosSomosSimios or WeAreAllApes gathered force over the weekend and continued to trend in Mexico on Monday.

Meanwhile the club, issued a statement on Sunday demanding “exemplary punishment” for Treviño.

“After the shameful publication of a public figure, Carlos Manuel Treviño Núñez, through social media insulting our player Ronaldo de Assis Moreira “Ronaldinho” we call upon the authorities to handle the matter,” reads an excerpt of the statement.

“We as a club will go to the furthest reach of the law so that these types of expressions never affect our players or any member of our club again.

“That is why we seek and exemplary punishment.”

Shortly after that, Mexico’s national commission against discrimination announced on Twitter that it has opened an investigation into the “racist expressions” against Ronaldinho.

Treviño’s post also prompted his own National Action Party to announce it would launch an inquiry.