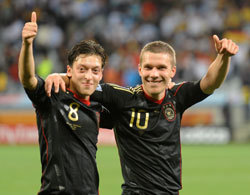 Leading betting expert Angus Loughran guides you through his top tips for the season, including his NAP of the campaign. See all the best football betting here.

Werder Bremen playmaker Mesut Ozil says he knows nothing of reports Barcelona have agreed a fee for his signature.

Spanish paper El Pais claimed on Tuesday that Barca had reached a tentative agreement with Werder to sign Ozil, 21, for €10 million.

However, asked about the move on Tuesday, Ozil told Bild: “I know nothing. I have spoken to no one.”

Several top clubs in Europe, including Manchester United, Chelsea and Real Madrid, are said to be interested in Ozil and United boss, Sir Alex Ferguson, refused to rule out a bid at the weekend, saying “I don’t know” when asked if he was hopeful of signing the player.

Werder Bremen director of sport Klaus Allofs has suggested that the deal could go ahead in the near future.

Allofs told the Kreiszeitung Syke newspaper: “It is possible that there is now a bit of movement in the issue, but I am not running backwards and forwards to the fax machine or getting sweaty palms when I check my emails to see if maybe an offer has arrived.”

Leading betting expert Angus Loughran guides you through his top tips for the season, including his NAP of the campaign. See all the best football betting here.