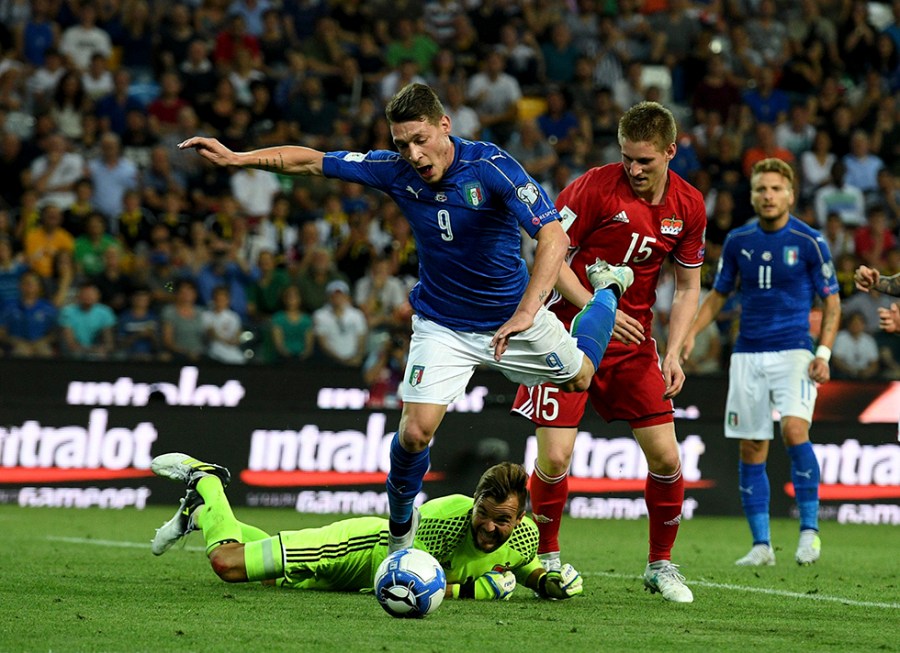 It was very much a case of “back to where you were” after Italy’s invevitably onesided 5-0 defeat of Liechtenstein in their World Cup qualifier in Udine on Sunday night. Given that Spain beat Macedonia 2-1 on the same night, the Group G standings remain the same with Spain and Italy still tied on top, both on 16 points and headed for a clearly all decisive qualifier in Madrid in September.
Before the game, there were those critics who had expressed the hope that Italy would score a hatful of goals, so as to overtake Spain on goal difference and go top of the table. Coach Gian Piero Ventura had warned against such thinking but, to some extent at least, it seemed in the first half that Italy were in too big a hurry to get on with the goalscoring. Thus, the half-time scoreline was a relatively “disappointing” 1-0, thanks to a real gem of a goal from the man of the match, Napoli’s Lorenzo Insigne.
“I just hope we learn something from that first half in view of Madrid”, commented Ventura afterwards, adding: “When you rush at it and do things without reasoning, you go off the rails. Before the game, I said that we would have to be patient but we were not. Everybody was busy doing his own thing. In the second half, in contrast, we did things the way we should and we produced lots of chances and the goals came.
“If we go to Spain in September, keen to really turn it on, we will pay for it.    Otherwise, however, we could win in Spain.”
It has long seemed obvious that the return clash with Spain this autumm would decide this group. Watching Italy’s progress over the winter, it at least seems possible that Ventura’s side will offer stiffer resistance than the team which drew 1-1 in Turin last October. Then only a late penalty, converted by Daniele De Rossi, saved Italy from what would have been a deserved defeat in a game in which Spanish technical superiority was at times embarassing.
Some of the men who will be expected to cause Spain problems in September did their stuff with a vengeance on Sunday night. Goalscorers and substitutes, Eder, Manolo Gabbiadini and Federico Bernardeschi, for example, showed that they have plenty to contribute.
Without much doubt, however, the most positive note on a night that was never going to prove itself “revelatory” was Napoli’s Lorenzo Insigne. At the end of an outstanding season for his club, Insigne brought his good form with him to the national team, opening the scoring with a trully wonderful 35th minute goal.
Fast, creative and above all supremely elegant, little Insigne was a constant thorn in the Liechtenstein side, setting up a hatful of chances for his team-mates, one of which was converted by Torino’s Andrea Belotti in the 52nd minute. Insigne is fast becoming a key cog in the Ventura machine, a unit which includes not only “old faithfuls” such as Leonardo Bonucci (sagely rested on Sunday because he was on a yellow card) and Gigi Buffon in defence but also younger players such as Atalanta’s 24-year-old defender Leonardo Spinazzola and 23-year-old striker Belotti.
Ventura furthermore used the Liechtenstein game to blood yet another promising youngster in the shape of Sassuolo midfielder, Lorenzo Pellegrini. His performance, alongside veteran Daniele De Rossi, was more than satisfactory whilst Spinazzola’s dominant performance at left back augurs well.
With five wins and one draw from his six qualifying games, Ventura would have reason to feel more than satisfied. Problem is that Spain also have five wins and one draw from their six games, with a superior goal difference to boot. Thus when he comes to assessing his first season as “CT” (Italian national team coach), Ventura has to conclude: “Qualification is obviously going to be difficult for us because it will be an all or nothing game against Spain but I have no recriminations to make against my squad, they have given me their all with great professionalism.”
For Ventura, in view of that September clash with Spain, the key may well be one of fitness for a game that comes early in the late-starting Italian season: “I said it a long time back. However, I’ve talked to the lads about it and they know what to do to turn up fit for that game. We’re lucky that Insigne will be playing in the Champions League qualifying games for Napoli and that both the Lazio and Juventus players will have had an extra game with their Supercoppa clash. However, it is a problem for us.”