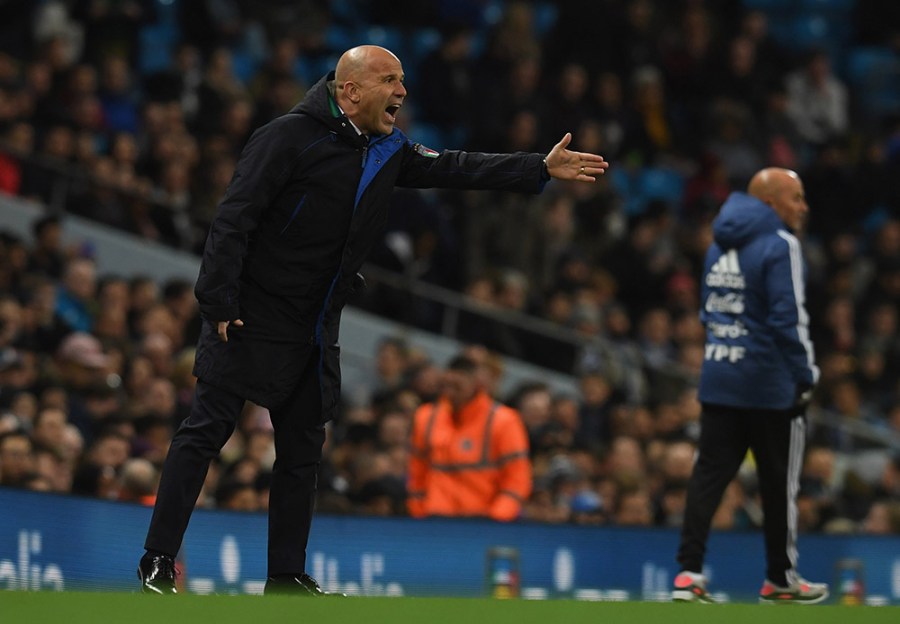 So far, things have not exactly gone to plan with Italy going down 2-0 last Friday night in Manchester to a less than full strength Argentina, missing among others, a certain Leo Messi.   In some ways, this was not as bad a performance as the result makes it look, given that Italy not only had a very good 20 minute period early in the second half but also that Napoli striker, Lorenzo Insigne, missed a clear chance in this period, with the score still 0-0.

Ironically, one of the key elements in Argentina’s win was Seville midfielder, Ever Banega, who came off the bench in the 65th minute to not only assume an influential role but also to score Argentina’s first goal, ten minutes later. Remember that 60-times-capped Banega was adjudged less than a success last season at Inter.

In the end, Banega was glad to return to Seville last summer. With the Andalusian club, he had won two Europa League titles prior to his move to Inter whilst in his one season with the Italian club, he played in four Europa League games and lost all four, against Hapoel Beer Shiva, Sparta Prague and Southampton respectively. Next week, too, Banega is due to line out in Seville’s Champions League quarter final tie with German giants Bayern Munich. So perhaps, the problems at Inter were not all his.

Friday night’s game had got off to a difficult start, at least for interim coach, Gigi Di Biagio. On the eve of the game, Federal Commissioner Roberto Fabbricini, the temporary boss of Italian football, had said: “As far as a national team coach [manager] is concerned, we are obliged to go looking for the best, with all due respect to the man in the job at the moment.”

Hardly a ringing endorsement for former Under-21 coach Di Biagio.  Mind you, the current Italian coach, brought in to replace Gian Piero Ventura in the wake of the Swedish disaster, always knew that the huge shadows of such as Roberto Mancini, Antonio Conte and Carlo Ancelotti were hanging over his job.

Against England on Tuesday, then, both Italy and Di Biagio badly need a win, the former to restore some international credibility and the latter to stake his own case for the Italy job.  It will be interesting to see if, in the interests of building for the future, Di Biagio will opt to leave out 40-year-old iconic goalkeeper Gigi Buffon, who picked up his 176th cap against Argentina.

Many commentators pointed to the illogical aspect of starting the post-Ventura, new cycle with a 40-year-old captain. Having paid a tribute to Buffon by fielding him against Argentina, it could be that Di Biagio will this time opt for 19-year-old Milan goalkeeper, Gigio Donnarumma.

In the wake of last Friday’s defeat, many underlined how Italy have now gone three games without scoring a goal, whilst they have only scored three in their last seven outings.   In that context, the Torino striker Andrea Belotti may replace Lazio striker Ciro Immobile alongside Insigne and Inter’s Antonio Candreva.  Belotti, nothing if not a regularly inspirational figure for Torino, probably spoke for all his team mates when he told reporters on Sunday:

“I don’t want to see anymore the footage of the Swedish game, just after the final whistle.  I’m tired of thinking back on that disappointment.   We’re here to get the show back on the road and we can only do that by staying united. Maybe, we should take a lead from Ferrari and the way they won today [Australian Grand Prix]…

“We knew that it would be hard against Argentina and England, two possible World Cup winners.  Now we’ve got to prove that we are still a top-level side, starting at Wembley, a stadium that conjures up great historical moments and great names.”

Speaking on Italian TV on Sunday night, Belotti further underlined the critical nature of the game for Italian football, adding: “We are all aware of the precarious nature of the moment.”

Indeed. Italy have never been good at taking friendlies seriously but this could be one occasion which proves an exception to that rule.