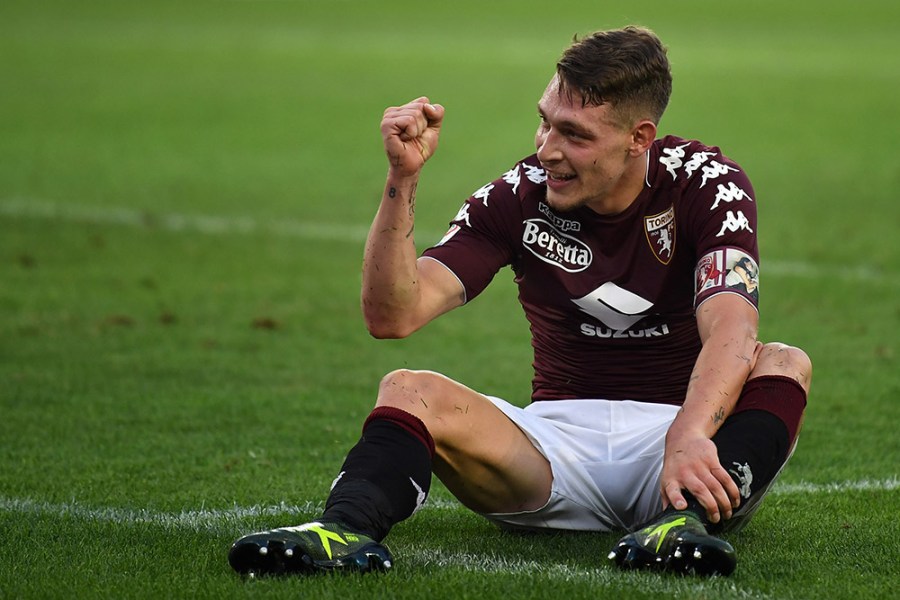 From the Italian perspective, perhaps the best news to emerge from last weekend’s second day of Serie A action concerns Torino striker Andrea Belotti. The man who is expected to lead the Italian attack in next Saturday’s all-vital World Cup qualifier against Spain at the Bernabeu in Madrid showed himself to be in excellent form in Torino’s 3-0 home win over Sassuolo.
Belotti’s poster boy moment came just before half-time, with the score on 0-0.  Torino right back Lorenzo De Silvestri made a good run down the right before knocking in an excellent deep cross. Even though the ball was nearly six feet off the grouund, Belotti opted for a spectacular scissors kick that hit the far corner of the net, leaving Sassuolo goalkeeper, Andrea Consigli, absolutely no chance.
This was a daring goal of brilliant timing and stunning technique. Little wonder that his coach, Serb Sinisa Mihajlovic, pronounced afterwards: “After a goal like that, you can understand why Andrea is worth €100 million euro. We will just have to hope now, in these last three or four days of the transfer market, that no club comes along with the €100 million. If that were to happen, then it would be up to the player.”
The point about Belotti, of course, is that he has been one of the “hottest” items on the Italian transfer market all summer, so much so that Torino have put a €100 million buyout clause on his head. Mihajlovic is wise to be worried about the possibility of some dramatic, last minute market action. In the mean time, Italian coach Giampiero Ventura can at least feel good that his central striker is looking good  right on the eve of a qualifier that will almost certainly condemn one of the two teams to the play-offs for Russia 2018. More on this clash, later in the week.
As for the rest of the weekend’s action, the most significant result was probably Inter’s 3-1 away defeat of Roma at the Olimpico on Saturday night. This had been billed as the first “big match” of the season, given that both these sides come under the “title challenger” category.
After Saturday night’s game, you might already be tempted to remove Roma from that particular category. In reality, the home side dominated this game for 65 minutes, took a deserved first half lead through Bosnian striker Edwin Dzeko and then had the misfortune to hit the post not once but three times. In the process, Roma failed to score the all-vital second goal.
In the end, Roma paid a heavy price for falling foul of the oldest rule in the book.   Namely, when you are going well and are on top, then you have just got to score that second goal, otherwise… So it was, up stepped the redoubtable Argentine Mauro Icardi to score two goals in 10 minutes (68th, 78th) to take the prize home to Milan.
Icardi is a lethal cobra of a striker, one of those players with an innate positional sense which sees him make the most of just about every opportunity that comes his way in the penalty area. Both his goals against Roma deserve to be used in a coaching manual on just how a striker should think and move in the box.
This game, of course, represented a huge triumph for Inter coach Luciano Spalletti, the man who, until two months ago, was the Roma coach. The Roma fans afforded Spalletti a rough welcome, jeering and whistling at him every time the ball came near him. There are different reasons for their antipathy but undoubtedly one of those reasons was the parsimonious manner in which the then Roma coach handled the final chapter in Francesco Totti’s extraordinary 25-year long, 786 game career with Roma.
To use a euphemism, the Roma fans (and Totti himself) were not always convinced that Spalletti was entirely sympathetic to Totti’s special, symbiotic and symbolic role  as a living club icon.    All that is water under the bridge now, whilst Totti is still at the Olimpico for matches, but these days in a suit and tie in his ill-defined role as a club director.
As for Inter under Spalletti, they could well build on this promising start.   We have said it before but it is worth repeating that the current Inter squad is not short on top-level talent. Icardi, Croat Ivan Perisic and Antonio Candreva in attack, Spaniard Borja Valero and Uuruguyan Mattias Vecino in midfield, Brazilians Miranda and Dalbert in defence with Slovene Samir Handanovic in goal all make for a handy unit and one which, under Spalletti, seems destined to improve.
As for Roma, under new coach Eusebio Di Francesco. they are not as bad as the final result would suggest. Against Inter, players like Argentine Diego Perotti and Dzeko in attack, Dutchman Kevin Strootman and Belgian Radja Nainggolan in midfield, Greek defender Kostas Manolas and  Brazilian goalkeeper Alisson all did more than well.   Roma, however, seemed short of that all-dominant figure who can get on the ball and make it happen for his team mates around him. All references to a Totti-like figure are purely co-incidental.
Final thought. After just two days, arguably the four strongest sides in the land, Juventus (4-2 win v Genoa), Inter, Napoli (3-1 win v Atalanta) and AC Milan (2-1 win v Cagliari), are already top of the table. It could be that, come next May, they will still be the top four.