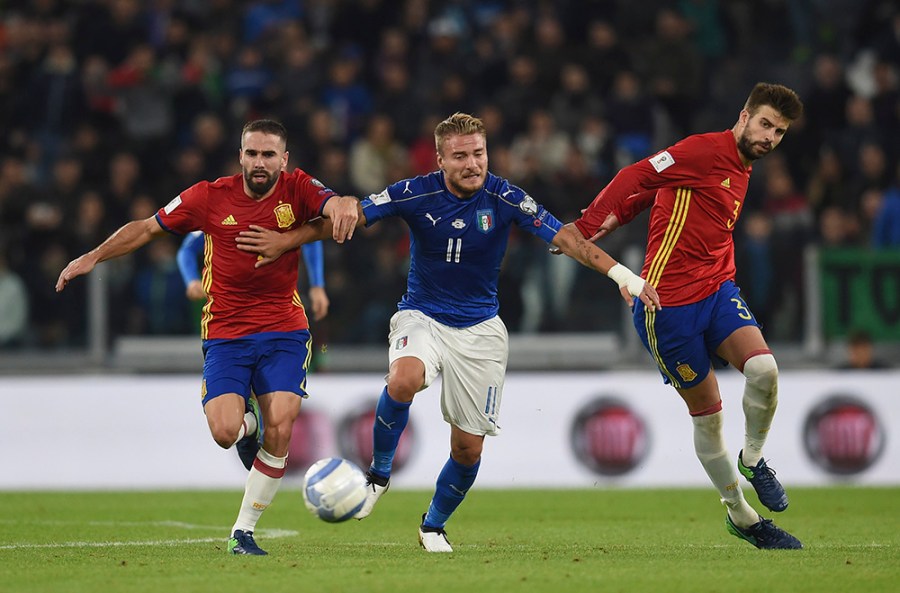 This is D Day. Spain play host to Italy at the Bernabeu in Madrid tomorrow (Saturday) for a World Cup qualifier that will almost certainly decide the outcome of Group G, in the process sending one of these two giants into the play-offs for Russia 2018.
Both teams come into the game with identical figures – 16 points, 5 wins and a draw.   Thus far, both have dropped points only to one another.  Spain, however, have the superior goal difference of +18 as opposed to Italy’s +14. Put simply, if Spain win or draw, then they will in all probability go on to win the Group.
Spain v Italy has become a modern day classic, producing some tremendous games.   In recent times, we had a first round Euro 2012 1-1 draw in Gdansk, Spain’s comprehensive 4-0 defeat of Italy in the Kiev final of the same tournament and, of course, Italy’s 2-0 defeat of Spain at Euro 2016 in France last summer.
Whilst Spain v Italy clashes are often tense, evenly balanced affairs, Italian coach Giampiero Ventura will hardly need reminding that this was definitely not the case when the two rivals met in that 1-1 draw in Turin last October. At half-time in that game, the possession ratio was 71 per cent Spain, 29 per cent Italy, while Spain had had six shots on goal and Italy none. Essentially, for the first 70 minutes, the match was played almost exclusively in Italy’s half of the field.
On that occasion, coach Ventura was criticised for having taken a much too cautious approach, fielding a very “Italian” 3-5-2 line-up in which the emphasis seemed to be on defence. As Italy prepare for the intimidating Bernabeu, there are indications that Ventura will again play it cautiously.
No one could argue with him fielding his all-famous BBBC defence of Buffon, Bonucci, Barzagli and Chiellini, tried and true over the years.   What will indicate much about Italy’s attitude is the use made (or indeed not made) of in-form Napoli attacker, Lorenzo Insigne.
Given his understandable respect for the all Premiership, Spanish attack of Silva, Morata and Pedro, Ventura my be tempted to play it safe with a midfield in which Milan’s Riccardo Montolivo lines up along with such as Man Utd’s Matteo Darmian, Milan’s Andrea Conti and Roma’s Daniele De Rossi. This would leave PSG playmaker Marco Verratti playing behind strikers Ciro Immobile of Lazio and Torino’s Andrea Belotti. In such a line-up, at least initially, there would be no room for Insigne.
Ventura goes into this game knowing not only that both his strikers are in good form but also that both have already played well for his Italy. Against this forward traction Spain, however, it remains to be seen how much these pair see of the ball.  At this point, a repeat of last October could be on the cards as Italy try to thwart and block a rampant Spain. Not that this will not work. Spanish midfield maestro, Andres Iniesta, knows this lesson all too well, telling Gazzetta Dello Sport this week:
“This game could be a lot like the one in Turin where we dominated for 75 minutes and then in the end, we might have lost.   You must never forget that great Italian quality, being able to do a lot of different things – Italian sides defend, they wait, they chase after you and they cause you problems…
“Italian football is about the collective, about the ability to be stretched to the limit without losing your cool and without  giving up, always believing that you might get back into it…”
Italian captain Gigi Buffon is less elegaic and more prosaic, saying: We need to play a quality, tight knit game, full of personality. We must not be afraid.   We have got to approach this game with a healthy madness, with a desire to surprise people, with courage and with determination. Spain are strong all right, but we are not to be undervalued or dismissed…”
It says something about the pressure of this game that Real Madrid defender Sergio Ramos has called on “his” fans at the Bernabeu not to whistle at traditional rival, Barcleona defender Gerard Piqué who will play alongside him in defence. The call for the Real and Barca fans to bury the hatchet for the purposes of seeing off Italy says it all.
With Diego Costa unavailable, Spanish coach Julen Lopetegui sprang a surprise when he re-called 36-year-old David Villa, the former Valencia, Barcelona and Altetico Madrid striker. These days, Villa plays his football at Major League Soccer side New York City FC  It may be that he will see action, if not against Italy, then in next Tuesday’s game away to little Lichtenstein.
If Italy have their doubts about how and when to use the in-form Insigne, so too will there be a lot of expectation concerning Real Madrid’s uncapped striker, 21-year-old Marco Asensio, already scorer of four goals this season. Even if Asensio does not play against Italy, it is always possible that he will make his debut in the much less pressurised context of the Lichtenstein tie. When the two teams met in their first Group tie in Leon last September, Spain thrashed the minnows 8-0.
For their part, in their second weekend game, Italy meet Israel in Reggio Emilio.    Having beaten the Israelis 3-1 in Haifa also last September, Italy will be expected to win. That, however, comes after the drama of the Bernabeu where the outcome of the Group will almost certainly be decided.  D Day awaits.
SPAGNA (4-3-3): De Gea; Carvajal, Ramos, Piqué, Jordi Alba; Koke, Busquets, Iniesta; Silva, Morata, Pedro. Ct. Lopetegui.
ITALIA (4-3-1-2): Buffon; Conti, Barzagli, Bonucci, Darmian; Candreva, De Rossi, Montolivo; Verratti;  Belotti, Immobile. Ct. Ventura.