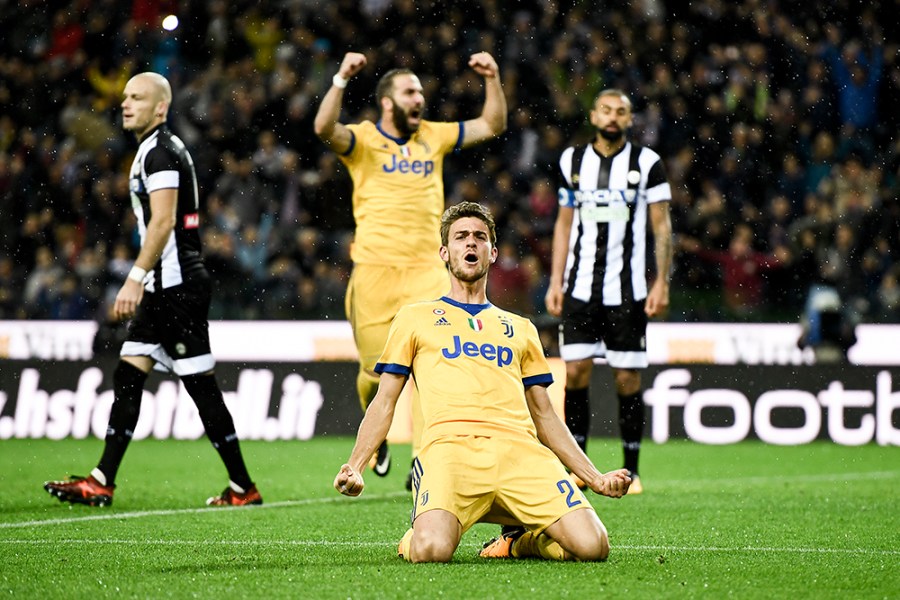 Just when you might have been tempted to think that, this year, finally, the unrelenting dominance of Juventus might be on the wane, up pops Sunday’s 6-2 away win against Udinese. For the time being you can put your “Decline and Fall of Juventus” theory back on the shelf.

It is not that there is anything stratospheric about the Old Lady defeating Udinese, a side which has lost seven of its nine Serie A games this season and one which currently lies in the relegation zone. The significant thing about this victory is obviously that it came at the end of a game in which Juventus had played with just ten men for more than an hour, following the 26th minute sending-off of Croatian striker Mario Mandzukic.

Rather than getting annoyed with his player, Juventus coach Massimiliano Allegri publicly thanked his striker after the game when making a comment that was clearly ironic but which was perhaps a shade “half in earnest, half in jest”, when saying: “I thanked him, we really needed to play with a man less and struggle a bit. Anyway, I was thinking of resting him for the game against Spal (Juve’s next opponents)… but I did thank him because we really needed a game like this.”

The Old Lady, of course, has had a couple of hiccups in these first two months of the season, at least by her own monstrous standards. Firstly, there was that emphatic 3-0  drubbing by Barcelona in their Champions League tie last month.  Then came a 2-2 away draw to Atalanta at the beginning of this month, followed by that 2-1 home loss to Lazio in Juve’s next Serie A game, just last week.

Those results left Juventus in third position, fully five points behind league leaders, Napoli. More importantly, those results encouraged the very real sense that something was wrong up in Turin. Why was Argentinian boy wonder Paulo Dybala missing his penalties? Why was his compatriot Gonzalo Higuain not scoring with his usual regularity? Why was the Juventus midfield being regularly over-run by opponents who seemed faster to and on the ball? Is the defence missing recently departed anchorman, Leonardo Bonucci?

A less than convincing 2-1 Champions League home win against Sporting Lisbon on Wednesday only managed to swell the ranks of those who were beginning to see a crack in the mighty Juventus armoury. For the time being, however, we would suggest to the army of Juventus bashers (approximately half the inhabitants of the Italian peninsula) that reports of her death have indeed been greatly exaggerated.

Allegri’s post-match irony was based on a very real observation. Namely, that his side badly needed a jolt, an against the odds struggle that would serve as a wake-up call and inspire Juventus back to their best form. To some extent, the Mandzukic sending-off did just that. When he took his early departure, Juventus were leading 2-1. At half time, that scoreline looked difficult but by no means impossible for Juventus. Two minutes into the second half, it suddenly began to look a lot more awkward when Udinese’s Brazilian defender, Danilo, equalised.

However, that was merely the signal for an outraged Juventus to rev the engines, hitting Udinese literally for six as German Sami Khedira, defender Daniele Rugani and midfield schemer Miralem Pjanic all scored. Khedira’s second half double saw him register a hatrick on the day. His obvious but slow return to form bodes ill for future opponents. Maybe the Juventus midfield will be a little harder to over-run next time?

The reality is that, at this early stage of the season, all bets are off. Juventus are now three points behind leaders Napoli and one point behind second-placed Inter Milan. Furthermore, if Dybala had not missed late penalties against both Lazio and Atalanta, then Juventus would now be top of the table with Napoli.  “Ifs” never win anything but they do serve to remind us that it is much too early to be jumping to any hard and fast conclusions.

For example, is the Old Lady really missing talisman defender Bonucci?   On Sunday, Bonucci was the villain of the piece as he got himself sent off in the 25th minute of AC Milan’s disappointing 0-0 home draw with Genoa. This prompted one commentator to ask, rather unkindly: “To which defence has Bonucci done most harm?  The Juventus defence (by leaving it) or the AC Milan defence (by joining it)?” (Maurizio Crosetti, La Repubblica)

Bonucci was caught out by the VAR (the Video Assistant Referee) replay after Genoa defender Aleandro Rosi crashed to the ground in the penalty area with a bad cut over his eyebrow following a Milan free kick. Alerted by the VAR team, match referee Piero Giacomelli consulted the touchline replay and immediately sent off Bonucci for having violently elbowed his opponent.

This was probably a fair and correct decision but it was also a reminder of what Anthony Trollope might well have called “The Way We Live Now”. In previous times and without the VAR, Bonucci’s foul would most probably have passed both unnoticed and unpunished. No longer.

Ironically, just as Juventus rallied when reduced to 10 men, so too did Milan give a good account of themselves, going much closer to winning the game than their opponents, Genoa. Nonetheless, following a 2-0 defeat by Roma and a last gasp 3-2 defeat by Inter in the Milan derby in their last two league games, this most recent result clearly ups the pressure on coach Vincenzo Montanella. With Milan in mid-table, the former Fiorentina and Roma coach badly needs a good result away to Chievo in Wednesday’s midweek fixture if he is to hold on to his job.

Talk of the Milan derby reminds us that arguably the most interesting performance of the weekend came from Inter Milan in their 0-0 away draw with Napoli, in that top of the table clash at the San Paolo on Saturday night. As we all know, 0-0 draws are not always dull affairs and this was a case in point, with both sides having chances to win the game.

In the end, one was left with two suspicions: (1) The Champions League campaign, including that dramatic 2-1 defeat by Manchester City, might be weighing heavily on Napoli and (2) Luciano Spalletti’s Inter gets better all the time and is beginning to look like a serious team. With Lazio joining Juventus on third spot, following a 3-0 defeat of Cagliari and with Roma also winning again, 1-0 away to Torino, it is beginning to look crowded at the top of the table.

As we said, all bets are off.