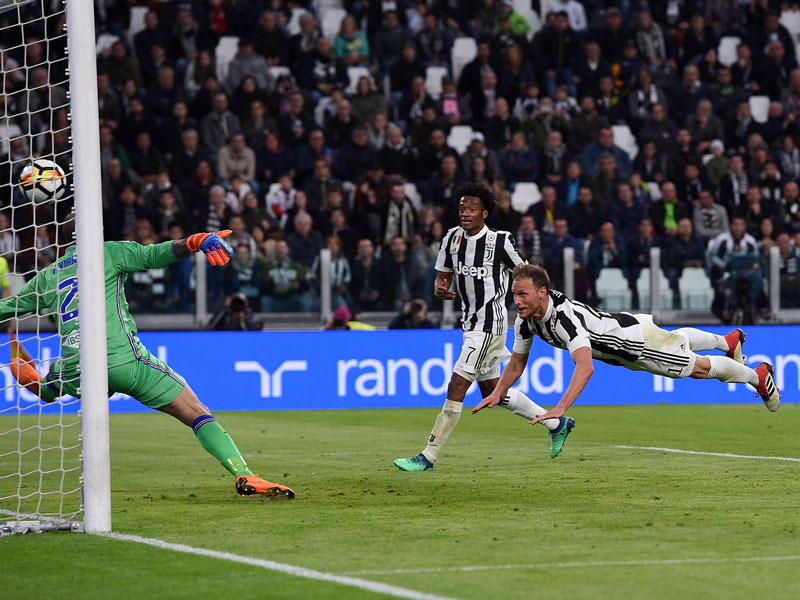 Paddy Agnew’s Notes from Italy: Juventus on Course for Seventh Title in a Row

Four days after that titanic night at the Bernabeu, Old Lady Juventus bounced back with a vengeance on Sunday, beating Sampdoria 3-0 to extend her top of Serie A lead to six points over second placed Napoli.   With six league games still to play, including a head to head with Napoli at the San Paolo next Sunday night, Juventus seem well and truly launched down the road to a seventh consecutive title.

Even if there is a full league programme on Wednesday in which Juventus travel to relegation battlers Crotone, whilst Napoli are at home to Udinese, it could well be that by late Sunday night, the scudetto will be as good as wrapped up and on its way to Turin. Were Juve to win the head to head (and given Napoli’s current lacklustre form this is by no means impossible), then they could find themselves nine points clear with just four games to play.

Even as their juggernaut steamed forward on Sunday, though, the Juventus minds were still fixed on that dramatic night in Madrid and that now infamous, last minute penalty award. Minutes into the Sampdoria game, the Juventus fans made it clear how they interpreted the matter, offering a cry of “Everybody Stand Up For Buffon”, directed at the major villain of the piece in Madrid.

Whilst Buffon’s hysterical, uncontrollable protests might have been judged as wrong by a number of neutral critics around the world, the Turin faithful had no such moral doubts. During the pre-match warm-up and whenever he touched the ball during the match, Buffon was greeted with applause whilst from the stands one banner read: “Thanks Lads, Now Heads Held High And On We Go”.

We pointed this out last week but it is worth repeating.  Juventus fans, Juventus players and Juventus management alike remain convinced that they were the victims of a huge sporting injustice last Wednesday night. Hero/Villain Buffon summed it up, saying: “I would say the same things again, I was wrong only in my manner. You cannot expect someone who lives sport to the full in the way I do to accept, to be balanced, because at the end of the day, even if I did say them in an excessive way, there was a logic to the things I said. I would say it all again, perhaps with a more civil tongue.”

Even as Buffon somewhat improbably defended himself, Juventus managing director Beppe Marotta also waded in the argument. Recalling how on Wednesday night, club President Andrea Agnelli had called for the VAR (Video Assistant Referee) to be used in Champions League football, Marotta said: “He (Agnelli) had a point.  I would add that the time has come to standardise refereeing in all Europe. You cannot use the VAR in Serie A, not have goal line assistants in the Premiership and then have them in Champions League.   That means three different types of refereeing. Then, too, you have got to use common sense both in the last minute decisions as well as in the actual appointment of the match referee. A game like that is a heavy responsibility for a 33-year-old ref.”

So, on we go.   Different cultures are still at work.  Even if some Italian critics might accept that Mehdi Benatia’s last gasp tackle on Lucas Vazquez was indeed a foul, those same critics have another point to make.  As La Gazzetta dello Sport put it last week: “To award a debatable, 93rd minute penalty which decides who gets into a Champions League semi-final is a refereeing mistake. Because every referee knows well that there are moments when his decisions weigh more than others, so he should only blow clear and evident fouls (at such moments).”

To many other minds, such an attitude is simply wrong.  If it is a penalty, be it in the Champions League or in a Sunday morning amateur league game, then you blow it, 93rd minute or not. As I said, however, this is a (footballing) “cultural” question.

Mind you, no one ever said that it was easy to accept losing a game in the 93rd minute, after you have given the sort of performance that Juventus gave on on Wednesday night. Mind you, too, Juventus have only themselves to blame for having blown the first leg in Turin by conceding a soft goal after just three minutes. That, not the penalty, was the Ronaldo goal which decided this tie.