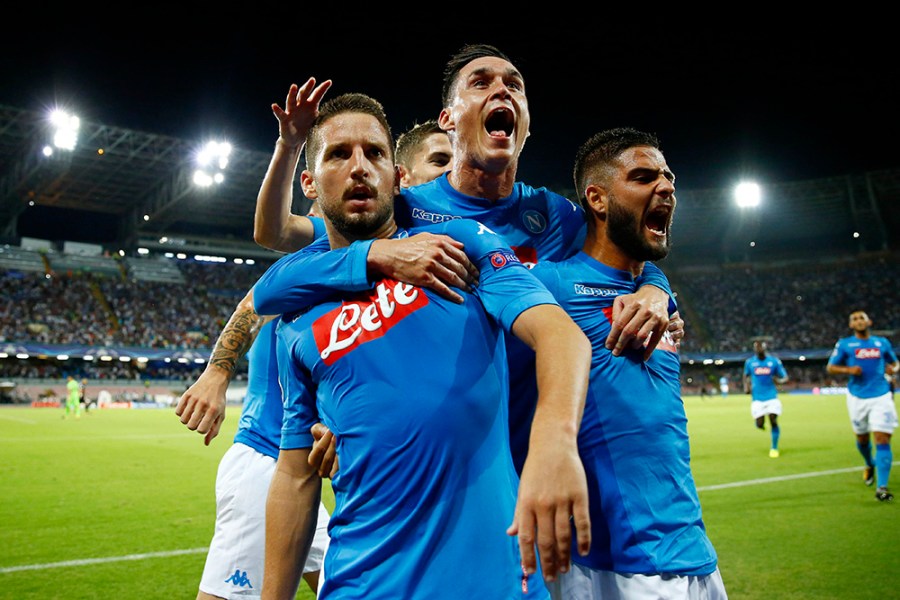 Tomorrow evening (Saturday) at the newly named Allianz Stadium in Turin, the Queen of Italian football, the Old Lady herself, Juventus will set the ball rolling on the 2017-2018 Serie A campionato when she plays host to Cagliari.   Anything other than a convincing win against mid-table Cagliari will be regarded as a bad start from the reigning champions, winners of the last six consecutive titles no less.
For the last six years, there has been only one real question at this time of year in Italy. Namely, can anyone knock Juventus off their all dominant perch? So, it would have been this year, too, at least until Juve’s emphatic 3-2 SuperCoppa defeat by Lazio last weekend.
The army of those who search desperately for kinks in the Old Lady’s armoury (and there are plenty of them) will point to a number of factors that give them hope that, finally, the title run is about to come to a halt.    For a start, they suggest, no side can win forever. For a second, the club has just sold arguably its strongest defender in Leonardo Bonucci (to Milan) and without him might struggle. For a third, there is the ongoing “Cardiff Blues” effect, in the wake of Juve’s dramatic and surprising second half collapse in their Champions League Final defeat by Real Madrid. Was all this not clearly visible in that lacklustre 3-2 defeat last week by Lazio?
For our part, we would suggest, at least for now, that reports of Juve’s imminent demise are greatly exaggerated. Clearly, the loss of Bonucci will hurt. Clearly, the Cardiff effect needs to be thoroughly worked out of the system. Yet, until we have definitive proof to the contrary, Juventus obviously remain the favourites and the side everyone has to beat.
It is significant, too, that right now there are many commentators who nominate Napoli as possible title winners. The point about Napoli is that the Maurizio Sarri coached club has been remarkably quiet on the transfer market whilst the side which beat Nice 2-0 in a midweek Champions League qualifier comprised no new talent. Yet, if this squad was only good enough to finish third last season why should it be good enough to win this year?
Essentially, there are two good reasons to hold out hope for Napoli. Firstly, when the side settled down in the wake of the injury which ruled out Polish striker Arkadiusz Milik for most of last season, it began to play some terrific football, inspired by the talented front line of Lorenzo Insigne, Dries Mertens and Jose Callejon.
If Napoli were to build on last year’s good work, they would then hope that their biggest rivals will not quite up to the mark. For example, leaving aside Juventus, there are good reasons for suggesting that both Milan teams remain a “work in progress” rather than the finished, title winning article.
Milan have been the biggest spenders on the transfer market (at least €210 million euro), buying not only Bonucci but also such as Portuguese striker André Silva (Porto), the Atalanta pair of Ivorian midfielder Franck Kessie and right back Andrea Conti, not to mentionTurkish midfielder Hakan Calhanoglu (Bayer Leverkusen) and the former Lazio captain Lucas Biglia to name the most obvious. Will coach Vincenzo Montella be able to shape these talents into a serious team? So far, their season has begun well with easy Europa League wins against Romanian and Albanian opposition but tougher opponents await them.
If Milan look like a work in progress, the same might be said of their city rivals, Internazionale. Whilst Inter have (thus far) not been spectacularly active on the market, they do start the season with a new coach in former Zenit and Roma coach, Luciano Spalletti. Were Spalletti to gel with his new squad, then Inter could have a very good season because this is still a side which boasts some terrific talent in the shape of players like Argentine striker Mauro Icardi, Croat attacker Ivan Perisic, Antonio Candreva, Roberto Gagliardini and new boy, Borja Valero, ex-Fiorentina.
As for the Roman clubs, AS Roma and Lazio, the history book would suggest that Roma will prove the biggest threat given that in three of the last four seasons, they have finished in second place, behind only Juventus.   However, in this first season of life without Totti, they may miss the pace of Egyptian Mohammed Salah (Liverpool) up front,the quality of Argentinian midfielder Leandro Paredes (Zenit) and the defensive aggression of German Antonio Rudiger (Chelsea).
Curiously, it may well be the other Roman, Lazio, who has the better season.   Lazio continually manage to present a competitive squad, short of title ambitions perhaps but always difficult to beat. Coach Simone Inzaghi is one of the brightest young talents in the Italian firmament whilst the Lazio front line of Serb Milinkovic, Brazilian Luis Alberto and Ciro Immobile seems destined for a good season.
In contrast, Fiorentina, the seventh of the traditional seven sisters which dominate the top of the table, seem set for a difficult year. The Florence club have parted company not only with Portugese coach Paulo Sousa, replaced by Stefano Pioli of ex-Inter fame, but also with Spanish playmaker Borjz Valero, attacking midfielder Federico Bernardeschi and Croat striker Nikolo Kalinic.      At this point, a mid-table finish, at best a Europa League qualification, would seem to be the height of their ambitions.
For some clubs, this will, of course, be a magical year, no matter what.   Ferrara-based Spal return to the top level for the first time in 49 years whilst Atalanta return to European competition via the Europa League for the first time in 26 years. To them and to every other club, a big “In Bocca Al Lupo” for the new season.