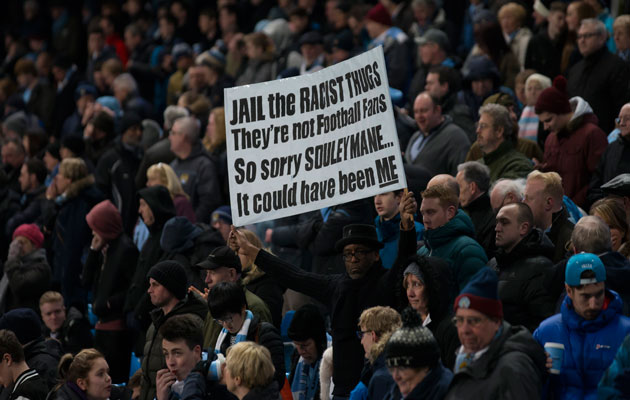 The commuter who was racially abused by a group of Chelsea fans as he tried to board a metro train last year, has accepted an invitation from Paris Saint-Germain to attend the re-match between the two teams later this month.

Chelsea were drawn to face PSG at the stame stage of the competition as they met last year, when the tie was almost overshadowed by an incident caught on camera in which Souleymane Sylla was prevented from boarding a train by a group of Chelsea fans chanting “we’re racist, we’re racist, and that’s the way we like it.”

Sylla’s lawyer told The Associated Press that his client has recovered from the incident that left him “traumatized” and plans to be at the Parc des Princes next week when the teams meet again.

The Paris prosecutor’s office opened an investigation into the incident and legal proceedings are still ongoing, lawyer Jim Michel-Gabriel said.

Michel-Gabriel said Sylla has been invited to the match on February 16 as part of a campaign launched by SOS Racisme, an organization fighting against discrimination.

“SOS Racisme have been in touch with him since the incident,” Michel-Gabriel said in a phone interview. “He was traumatized and in a state of shock. He is still undergoing therapy but at the same time he knows he must carry on with his life. He is not the type of person who stays at home indulging in self-pity.”

Chelsea issued a public apology after the incident but Sylla rejected the Premier League team’s invitation to go to London to watch them play the return leg against PSG.

Michel-Gabriel said Sylla had been off sick from work many times over the past year because of the incident. More recently, he has had the welcome distarction of a new addition to his family.

“It’s good news, and it shows he is coping well,” he said. “Racism is not something joyful, but he experienced it before the incident. There is no reason for him not to get out of this spiral.”