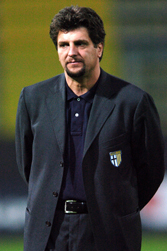 Serie A strugglers Parma have sacked their coach Silvio Baldini following Sunday’s 2-0 defeat to Livorno left them in the relegation zone.

“Silvio Baldini has been removed from his coaching post at the club,” Parma said in a statement published on the club’s website.

“The team will be temporarily put in the hands of assistant coach Daniele Zoratto, who will be in charge of his first training session this afternoon, ahead of any further decisions,” it added.

Baldini arrived in the close season from Empoli, who he led to promotion from Serie B in 2002 but he has presided over just two wins this season and with the club lying in 16tth place in Serie A, the board decided to act.

Zoratto will become caretaker coach although he is not being considered for the role on a permanent basis. there have been reports that Parma might offer the post to their technical director, Arrigo Sacchi, the former Milan and Italy coach.