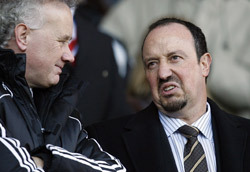 Liverpool’s chief executive Rick Parry is to leave the club at the end of the season, according to reports.

Manager Rafael Benitez has been at odds with Parry for some time and has been looking to assume greater control of the club via his contract negotiations. He now appears to have got the power struggle with Parry.

Parry was a central figure in the rows at Anfield, aligned himself with George Gillett while co-owner Tom Hicks was understood to have backed Benitez, but it now seems the Americans have reached an accord by removing the CEO.

Parry said he had been proud to be part of the club for over a decade.

“I have had 12 very exciting years at Liverpool and am extremely proud of what has been achieved by the club over that period,” he said.

“The 1-0 victory in Madrid [on Wednesday] was a wonderful reminder of the many high points we have experienced and adds to the moments that make Liverpool and its magnificent fans so special.

“It has been a privilege to serve the club and as a lifelong supporter I wish the owners, Rafa, the players and the wonderful staff all the very best for the future.

“I will be leaving at the end of the season knowing that the club remains strong and with a set of supporters who deserve success in all that Liverpool does.”

Liverpool co-chairman Hicks paid tribute to Parry: “Rick’s commitment to Liverpool Football Club is epitomised by his desire to ensure that this transitional period is managed efficiently and we are grateful to him for his help.

“He will always remain a friend of the football club,” he added.

Fellow co-chairman Gillett added: “I would like to thank Rick for his significant service to the club and the assistance he has given us since we joined Liverpool. He has been integral to the club’s success over the past decade and leaves with our best wishes for the future.”

The departure of Parry may clear one of the final hurdles preventing Benitez signing a new long-term contract at Anfield.

Parry was in control of transfers at the Merseyside club with the Spanish boss eager to take full control of that area.

This could now be an indication that Hicks is now the dominant force in the boardroom with Gillett’s man leaving the club.

Commercial director Ian Ayre and finance director Steve Nash are thought to be in contention to replace Parry.