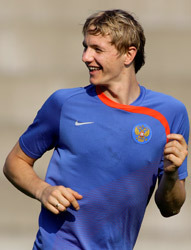 Roy Keane returns to the City Ground as his Sunderland side take on Nottingham Forest in the Carling Cup tonight, live on Sky Sports 2 at 19:45.

Roman Pavlyuchenko is close to completing a £12m transfer to Tottenham Hotspur.

The Spartak Moscow striker was pulled out of his club’s squad to face Dynamo Kiev in the Champions League qualifying round tonight as he prepared to put the finishing touches on his move to White Hart Lane.

“I can confirm I’m joining [Tottenham],” he said. “Right now I’m getting my visa and as soon as it is ready I will fly to England to sign a contract. I won’t play in Kiev. Everything has happened very quickly so I couldn’t even say goodbye to my team-mates.”

Earlier the Russian striker been quoted in the russian media as saying that he would not join Tottenham.

“I could not decide if I wanted to go to England at first – first yes, then no,” he said. “The only thing that stopped me from leaving was my family. But now all doubts are behind me and I decided to sign a contract with Tottenham and the formalities are practically settled.”

“There is a concrete sum which Tottenham proposed and we have agreed the amount,” said Spartak’s general manager, Valery Karpin. “If Roman will agree a contract then we are ready to let him go.

Pavlyuchenko may not be the last arrival at White Hart Lane before the August 31 transfer deadline as Spurs look to bolster their attacking options. Darren Bent was the only striker in the squad for Saturday’s 2-1 defeat by Sunderland, and Dimitar Berbatov has been linked with a move to Manchester United.

Roy Keane returns to the City Ground as his Sunderland side take on Nottingham Forest in the Carling Cup tonight, live on Sky Sports 2 at 19:45.