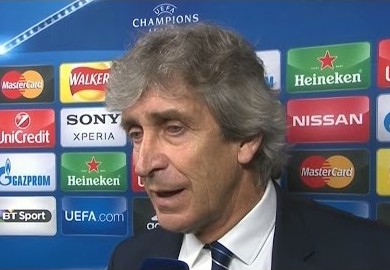 Manuel Pellegrini has made a bold prediction and said that Manchester City can win the Champions League this season.

City claimed a famous victory over Paris Saint-Germain through a fantastic Kevin De Bruyne goal, after Sergio Aguero had missed from the penalty spot.

PSG manager took a swipe at City by extraordinary claiming that Pellegrini’s side would be a “guest team” in the semi-finals.

However the City manager was sure his team could compete with Europe’s cream of the crop.

“Of course we can be the best team in Europe,” he said

“Of course because I think it is one of the targets of this club, to try and improve every year [in this competition]. I know that we receive a lot of criticism for different reasons, but I think that we are improving every year.

“One of the targets is to win, of course, some day the Champions League. Of course, this season, next season.

“If you are in the semi-final, you know you have to play against a very big team of Europe, but playing in the way we did tonight I think that we played better than Paris Saint-Germain. That is a very strong team with very good players.

Kevin De Bruyne has directly contributed to 27 goals in all competitions for Manchester City this term. #EURO2016 pic.twitter.com/fEgOsg4MeZ

He also praised Kevin De Bruyne. De Bruyne is now one of City’s main men and he will be key to their aspirations for Champions League glory.

“We have a lot of trust that we can play against anyone in the way we played.”

“Kevin has an important role for the team,” the City boss added. “He’s a very dangerous player.

“We deserved a goal before he scored. We dominated the game from the beginning until the end.”