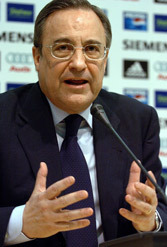 Newcastle are out of the bottom three after Alan Shearer’s side beat North-east rivals Middlesbrough 3-1. But with just two games left can they still beat the drop?

Real Madrid presidential candidate Florentino Perez has promised a ”spectacular project” to get the Spanish club back among the elite of world football.

Perez was Madrid president from 2000-2006, during which time the club won two Primera Division titles and the Champions League, and became renowned for its’ ‘Galacticos’ policy of signing big-name players.

”We are working towards and we will work to create a spectacular project, and that is to make Real Madrid the best club in the world once more,” said Perez.

”We want to clean the image of the club and become leaders in Europe.

”A club like Real Madrid needs to have several of the best players in the world and even though I can’t discuss names today, we have a spectacular project on the sporting side.”

Cristiano Ronaldo and Kaka are two of the names that have been closely linked with a move to Madrid over the last few years, and media speculation in Spain suggests they will be at the top of Perez’s wanted list.

When asked about Manchester United winger Ronaldo at a press conference at the Ritz Hotel in Madrid, Perez would only say: ”Cristiano Ronaldo is one of the best players in the world.”

As for Milan midfielder Kaka, Perez said: ”I’m an intimate friend of (Milan vice-president) Adriano Galliani and when we meet up we always have a good chat – and we also talk about football.”

Madrid have failed to get beyond the last 16 of the Champions League in any of the last five years, and although they have been Primera Division champions for the last two seasons, they look certain to end this campaign empty-handed – while Barca are on course for an historic treble.

”Barcelona are having a magnificent season, but that is motivation for me because I want to make Madrid great again,” he said. ”I want us to be the leader in Europe, to compete with teams like Barcelona, Manchester United and Chelsea.

”We have seen that Barcelona and Manchester United have played the best football in Europe this year – and that’s the level we have to get to.”

Newcastle are out of the bottom three after Alan Shearer’s side beat North-east rivals Middlesbrough 3-1. But with just two games left can they still beat the drop?