Philippe Senderos time at Rangers: over before it has really begun?

He never tasted defeat in three outings against Rangers during a loan spell with Celtic in 2001.

For the duration of his time at Celtic, Vega enjoyed playing against their bitter rivals, but, is sympathetic to the plight of one of his compatriots, who is struggling to recover from a calamitous introduction to one of the world’s fiercest rivalries.

On September 10 Celtic ran out comfortable 5-1 winners in what was the first league meeting between the clubs since Rangers returned to the SPL.  The gulf in class between the two sides was encapsulated by the performances of Philippe Senderos and Moussa Dembele respectively.

The Swiss defender’s lack of match fitness and pace was badly exposed by the young striker and by the time the Frenchman had completed his hat trick, his opponent was no longer on the pitch. 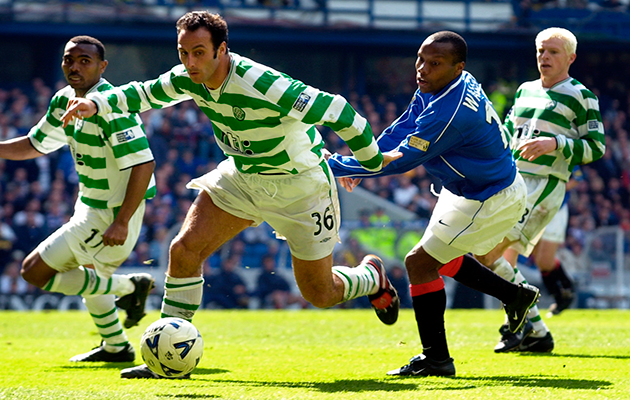 Ramon Vega (left) in action during an Old Firm derby.

The former Arsenal, Milan and Valencia centre-half received his first yellow card in the 63rd minute with a second and subsequent red being shown 12 minutes later.  He was at least spared the ignominy of finding the back of his own net.

Had he done so, it could be argued his display would have eclipsed that of Jonathan Woodgate, whose maiden appearance for Real Madrid is widely considered the worst in recent times.  The Englishman found his name going into the referee’s notebook twice resulting in an early shower.  Prior to that he also managed to bullet a header passed his own goalkeeper.

The former Leeds and Newcastle defender – who was recently appointed as a scout for Liverpool – never fully recovered from the events at the Bernabeu against Athletic Bilbao 11 years ago.

Senderos is now facing a similar battle to restore his reputation.  However, early indications show he is struggling to do so.  Following his subsequent suspension he made his home debut in another Glasgow derby – against Partick Thistle.

He was cautioned by referee Stephen Finnie in what was another unconvincing showing.  Had officials witnessed an earlier off the ball incident involving Ade Azeez, then Senderos in all probability would have received his marching orders. Initially it was suggested he would face trial by television but the Scottish Football Association decided not take any retrospective disciplinary action.

Since retiring from football in 2003, Vega has forged a successful career in finance and heads up his own asset management firm.  He recently spoke at the Soccerex Global Convention in Manchester, where he took time out to give his views on the struggles of his fellow countryman, who has been capped over 50 times by Switzerland but was left out of the Euro 2016 squad.

“It wasn’t the best was it?” Vega replies, when asked to comment on Senderos’ showing against his former club.

“A negative start at your new club doesn’t necessarily mean you will not be able to go on and make a positive contribution in the future.

“There would have been less attention on him had he been sent off against a Kilmarnock or a Dundee.  Unfortunately, for him, it was against Celtic at Celtic Park in front of 60,000 people.  That puts it into a different perspective. The media and the fans will not let him forget about it.”

After being released by Aston Villa at the start of the year, Senderos returned to his homeland for a spell with Grasshoppers.  He then accepted a one year contract offered by the Ibrox club in August as a free agent.

There was much speculation whether Rangers manager Mark Warburton would start the player, short on match practice, in such a high profile fixture.  He did so and to disastrous consequences.

“I’m not in a position to tell him [Mark Warburton] how to do his job,” Vega added. “He obviously saw him in training and made his decision.  Bear in mind it is an Old Firm game. Even if you have one leg you will still try your best to convince the manager that you’re match fit.

“You don’t want to miss out.  If you’re unfit then you’re hoping the atmosphere will give you that extra 20 or 30% to get you through. However on this occasion it didn’t work out for Philippe.

“Don’t forget he has played for big teams in major European leagues.  He has big experience at international level.  He does have ability. I’m sure Rangers will do all they can to help him. I’m hoping he does have the mental strength to get over the Celtic game.”

The 31-year-old potentially had an early opportunity to redeem himself when the two teams met in the League Cup semi-final at Hampden last month.  However, Mark Warburton instead settled on pairing Rob Kiernan with the 38-year-old veteran Clint Hill at the heart of the defence.

It could be argued that Warburton’s decision to omit the player was based on the belief that Senderos’ psychological scars had not fully healed and there was a high probability of Celtic’s pacey strike-force exposing the defender’s vulnerabilities again. In that case it would have been impossible to restore his already shattered confidence.

There was a marked improvement by the Rangers rearguard this time around as they only succumbed to a late Moussa Dembele strike, which sent Celtic through to the final.

Given what he has endured during his short tenure in Scotland, it would be no exaggeration to say his time at Rangers may already be over before it has even begun.