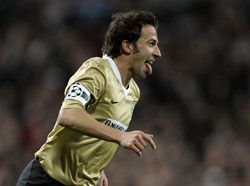 The 33-year-old Italy striker received a standing ovation from the Bernabeu crowd when he was substituted in injury time after inspiring Juventus to their first win at Santiago Bernabeu since 1962.

“When you have a great player who is performing superbly and giving his all for the team the colour of his shirt does not matter,” Juve coach Claurdio Ranieri told a news conference.

“Del Piero once again was superb but the whole team played a fantastic game. Congratulations to the Madrid fans who gave a standing ovation to Del Piero. It was fully deserved, a great gesture.”

With new Argentina coach Diego Maradona watching to see some of his countrymen in action, Del Piero scored in the 17th and 67th minutes at Bernabeu Stadium to give Juventus 10 points from four games.

“Maradona was in the stands? I am happy to have scored in front of him. I hope he comes to watch us more often,” Del Piero told reporters afterwards.

“I am proud of the applause I received at the Bernabeu, an incredible stadium and an extremely important one. You live for these kinds of emotions,” said Del Piero.

“I want to thank the Madrid fans for their applause. We are very happy.”

Real players were full of admiration for the striker.

“A player like Del Piero is always difficult to stop. Today he was amazing again,” said winger Royston Drenthe.

“I enjoyed the ovation given to Alessandro Del Piero because he is a great player, he has proved his class and the Bernabeu recognised this fact.”