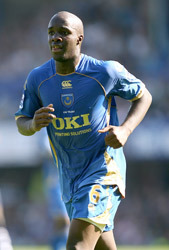 Portsmouth have confirmed they have accepted a bid from Real Madrid for French midfielder Lassana Diarra.

Real made a move for Diarra as new boss Juande Ramos looks to strengthen his injury-ravaged squad in the transfer window.

Portsmouth have now accepted an undisclosed fee for the player and Diarra will now travel to Madrid to discuss terms with the Spanish champions.

“We have always said that we would only allow our players to leave if we received an exceptional bid,” a Portsmouth spokesman told the club’s official website.

“We could not stand in the way of a move such as this for Lassana.

“It shows how far the club has come under the ownership of Alexandre Gaydamak when Real Madrid come in for one of our players.

“Should the deal be completed, the club has already identified possible replacements.”

Diarra hinted earlier this week in Spanish newspaper Marca that he wanted to move to Real.

“When you talk about Real Madrid the other teams are no longer important, all the others take second place,” he told Marca.

“It would be a dream to be able to play for such a large club.”