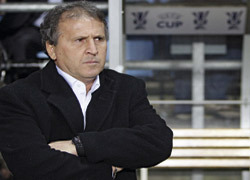 Having won the 2008 title with a team of newly-signed players, the defending champions Rubin Kazan having done relatively little in this winter’s transfer market.

Anri Khagush, a 22-year-old right-back from Belarus champions BATE Borisov, left-winger Pyotr Bystrov from FC Moscow and former Real Madrid youth team defender Cesar Navas from Racing Santander are the only acquisitions of note prior at the start of a season which will be marked by Kurban Berdiyev side’s Champions League debut.

Rubin’s performances in their first European campaign will show the long-term potential of a team whose success last year was dismissed as no more than a good-luck story by many critics.

Second-placed CSKA Moscow will surely try to use the new season to re-establish their positions at the top of the Russian football ladder. They start the season with a new coach – Zico having replaced Valery Gazzaev, who led the club to 2005 UEFA Cup victory.

With more than a dozen non-Russian players in his squad, Zico will undoubtedly build his tactics around Vagner Love – the league’s top scorer last term – who has been impressive in the current UEFA Cup campaign. To assist the Brazil international, CSKA will look to promising Russian youngster Alan Dzagoev and Serbia star Milos Krasic. CSKA’s strong midfield has been augmented by teenage Czech prospect Tomas Necid and Brazil’s Daniel Carvalho, who returns from a one-year loan at Internacional of Porto Alegre.

A limit of six foreign players on the pitch, reduced from seven last season, will not be a big problem for Zico as CSKA have a number of talented youngsters, including 17-year-old
left-back Georgy Shennikov.

There are more promising youngsters over at Dynamo Moscow, where the 18-year-old Sergey Terekhov and 19-year-old Artur Yusupov have been joined by Romania’s creative midfielder Adrian Ropotan, 22, who cost £2.75million from Dinamo Bucharest. Dynamo, who finished third last season, will hope that Ropotan’s arrival will compensate for the loss of playmaker Igor Semshov, the Russian international who has joined Zenit.

Semshov will link up at Zenit St Petersburg with his former Dynamo team-mate Danny and Zenit hope the pair will form a strong partnership in central midfield, given that Andrei Arshavin has completed his move to Arsenal and Ukraine international Anatoliy Tymoshchuk is set to leave for Bayern Munich in the summer for a reported £9.6m. Zenit’s midfield has also been augmented by the £2.6m signing of Hungary international Szabolcs Huszti.

Montenegrin coach Miodrag Bozovic, who surprisingly lifted low-budget Amkar Perm to fourth place last year in his first season in Russia, has accepted a lucrative offer from FC Moscow, where he succeeds Oleg Blokhin, who could only steer Moscow to ninth place last season.

Last year’s poor showing of two more Moscow clubs, Lokomotiv (seventh place) and Spartak (eighth) has forced the clubs’ owners into promising big changes. According to Loko’s ambitious president, Nikolay Naumov, the Russian Railways team has only one goal – “winning all the domestic competitions”. Having said goodbye to a number of old-timers such as Vladimir Maminov and Sergei Gurenko, Lokomotiv have acquired some classy new midfielders, including Croatian midfielder Tomislav Dujmovic. Russian internationals Diniyar Bilyaletdinov, Dmitri Torbinski and Dmitri Sychev, and the Russia-born Nigeria striker Peter Odemwingie remain a strong attacking quartet. Lokomotiv manager Rashid Rakhimov almost lost his job last year, but saved himself by beating champions Rubin on the last day of last season and was given another chance by owners who say they do not want to look abroad for a replacement yet.

Meanwhile, the large army of Spartak fans are pinning their hopes on ex-Denmark star Michael Laudrup, who has been at the helm of the red-and-whites since the autumn of 2008. In a bid to avoid cliques and infighting, Spartak, who are owned by oil giant Lukoil, will not have more than three foreign footballers of one nationality in the squad any longer. That’s bad news for Spartak veteran Mozart, since Alex, another Brazilian, has joined the team from Internacional on a £4.4m contract until 2014. The midfielder is expected to boost Spartak’s attack which looked unimpressive last year. There are two other Brazilians – strikers Welliton, who missed last season due to injury, and newly-signed Rafael Carioca. Having loaned Czech Republic midfielder Radoslav Kovac to West Ham, Spartak brought back their ex-winger Denis Boyarintsev from Shinnik.

Premier League newcomers Kuban are headed by new manager Sergei Ovchinnikov. This is a widely-awaited start of a coaching career for the ex-Lokomotiv, Benfica and Porto goalkeeper who was nicknamed The Boss for his commanding skills and confidence as a player.

Although they are headed by experienced manager Oleg Dolmatov, newcomers FC Rostov will have a hard time struggling for survival.

Tom Tomsk and Khimki, who managed to save themselves from relegation at the very last moment in 2008, have the same task once again. Khimki, a club from the suburbs of Moscow, are now coached by Konstantin Sarsania, a well-known international scout and former assistant of Dick Advocaat at Zenit.

Saturn, another team from the Moscow region, are likely to be fighting for a mid-table spot along with Terek Grozny and Spartak Nalchik.

Terek have been boosted by the signing of the experienced 34-year-old former Romania striker Adrian Ilie, who was persuaded by the club’s vice-president Haidar Alkhanov to come out of retirement.

Krylia Sovetov, who finished equal on points with fifth-placed Zenit in 2008, will try to rise even higher under their talented young manager Leonid Slutsky, who decided to continue with the Samara club despite a number of lucrative offers, including one from CSKA Moscow.