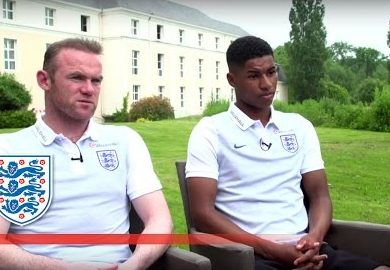 England striker Marcus Rashford has spoken about his joy about being called up to Roy Hodgson’s Euro 2016 squad and says it feels dreamlike.

Rashford has enjoyed a breakthrough season for Manchester Utd and was rewarded for his fine performances with a call up to the national team, and naturally Rashford was delighted.

Rashford told FATV: “I’m very happy to be here. I think it’s a good way to end the season for me, and hopefully we get some joy in the tournament.

“It doesn’t seem real, when you look back at it. [At Christmas] I was actually trying to work my way into [United’s] U21s side and all of a sudden I appeared in the first team. You have to be ready when your chance comes.

“To be honest, I wasn’t really thinking about the England set-up as much because obviously at United there was a lot of games coming thick and fast so all of my focus was on those games.

“At the end of the season you hear talk and stuff, but to be here now is just amazing. For it to be in my hands to go out and help the country is an amazing feeling.”

Wayne Rooney – who is not a stranger to early international stardom – has hailed the progress of his teammate.