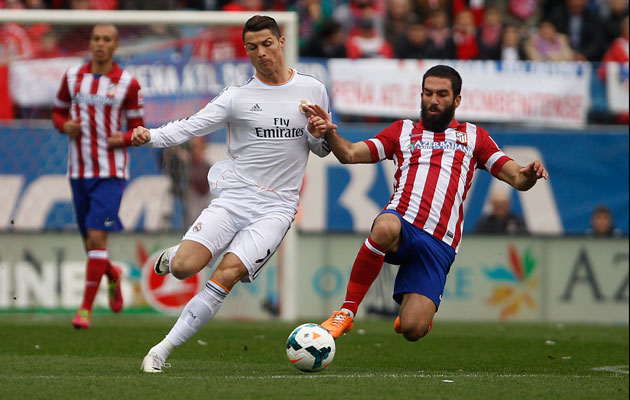 Media shorthand would portray tomorrow’s UEFA Champions League Final in Lisbon as a confrontation between Cristiano Ronaldo and Diego Simeone; combat between a super-gifted player and a super-motivated coach.

Real Madrid v Atletico de Madrid, a unique derby of derbies in the history of European club competition, presents a challenge to the fans one city but also a tease to the imminent World Cup.

Can July in Maracana provide a match-up as exciting in prospect in this one? If Brazil are in ‘their’ World Cup Final then a processional crowning will be in sight; if they are not then the atmosphere will be devoid of local passion. Maybe a ‘final loser’ either way.

So tomorrow in the Estadio do Benfica is not only a mano a mano between two of the major personalities of the European game on and off the pitch, it is also set up as a weapon in the Club v Country battle.

This contest has been running almost as long as national team football itself. Now, with the enormous investment being ploughed into the great clubs, it has new intensity.

The clubs are winning: national teams can play only on dates approved by the clubs; players are released only in return for guaranteed insurance cover; players go to the World Cup only in exchange for daily ‘compensation’ payments to their clubs.

Certainly the World Cup has a status beyond just about any other sporting event but, over the next years, the clubs will press their demands for it (and FIFA) to dance to their tune.

Already one factor is established: the quality of football on view in the Champions League is superior to the standard at the World Cup.

This is logical. Long gone are the days when national team players represented the cream of one nation’s league tournament. The major World Cup protagonists in Brazil will look largely to the clubs of western Europe to find their players.

The highest standards of ‘real’ international football are represented by the cosmopolitan giants of the Champions League . . . which talks back to events in Lisbon.

Real Madrid boast a legacy of class, historical achievement at home and abroad and a decades-long chain of the game’s finest players represented in this day and age by Ronaldo, Iker Casillas, Sergio Ramos, Angel Di Maria, Karim Benzema etc.

Gareth Bale, as this past season’s new boy, may not be up there with the legends of old – Di Stefano, Puskas, Gento, Santamaria & Co – but he will be there if Madrid win tomorrow because victory will represent fulfilment of the aching ambition of the Decima . . . the 10th European Cup.

Atletico represent the underdog in achievement terms. They have never won the Champions League Cup; they have represented merely a temporary happy perch for the likes of Vava, Joaquin Peiro, Fernando Torres and Radamel Falcao and even Diego Costa is apparently Chelsea-bound.

But underdogs can bite and Atletico snap with the sharpest of teeth which Simeone generated as a player with Argentina and in Spain and Italy. They proved the point in seeing off both Real and Barcelona to triumph in La Liga, their first league title in 16 years.

Two ends of the spectrum: Real the high-spending upper class, Atletico a socialist revolution on footballing legs, meticulously constructed with a street-wise use of loan and player investment systems; no loan has been more important than that of Belgian goalkeeper Thibaut Courtois from Chelsea.

UEFA’s French president Michel Platini may have egalitarian concerns about both clubs as Real and Atletico reprise a European Cup meeting from the early, more romantic days of the competition. That was in the semi-finals in 1959.

Atletico had finished runners-up in Spain behind Real the previous season but, under the rules pertaining back then, they were invited to compete because Real had also won the Champions Cup (for the third tme) in 1958.

The first leg was staged in the Estadio Bernabeu. Real won 2-1 after going a goal down and seeing Brazilian World Cup-winner Vava miss a penalty; Atletico won the return 1-0 in their old Estadio Metropolitano.

Another old rule – no away goals then – sent clubs level on simple aggregate to play-off. Real won it 2-1 in Zaragoza with Ferenc Puskas scoring the winner and went on to beat Reims 2-0 in the final.

Real may have their eye on history via a 10th cup but Atletico are on a revenge mission which has been stalled for a very long time.

Both clubs have played 12 games in Europe this season. Real have won 10, drawn one, lost one, scoring 37 goals in the process (Ronaldo a competition record 16); Atletico have won nine, drawn three and lost none, scoring a more modest 25 goals.

If the final is tense and tight then Atletico and Simeone will probably evolve from underdogs into top dogs; but if there are goals and excitement then Real and Ronaldo will probably be celebrating at the final whistle . . . and the World Cup will have been set a quality control challenge as never before.