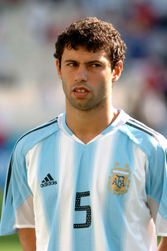 The 20-year-old was a member of Argentina’s Gold Medal-winning Olympic side earlier this summer and his performances in Athens have alerted a numberof Europe’s leading clubs.

A move for the River Plate midfielder could come as soon as the transfer window opens in January, with the player and the club’s President confirming that that Mascherano stay in Argentina until December.

“Speaking with a club of this category is a joy for me,” Mascherano told Ole.

“But at this moment my own personal challenge is only to play with River Plate.”

River Plate president Jose Maria Aguilar revealed that Real Madrid are not the only European side interested in his young star.

“It is not just the Spanish club who is interested in the player,” said Aguilar.

“Other European clubs are in pursuit of Mascherano.”

Dutch side PSV Eindhoven are reported to be interested, while Arsenal manager Arsene Wenger viewed Mascherano as a potential replacement for Patrick Vieira until the French international decided to sytay at Highbury.