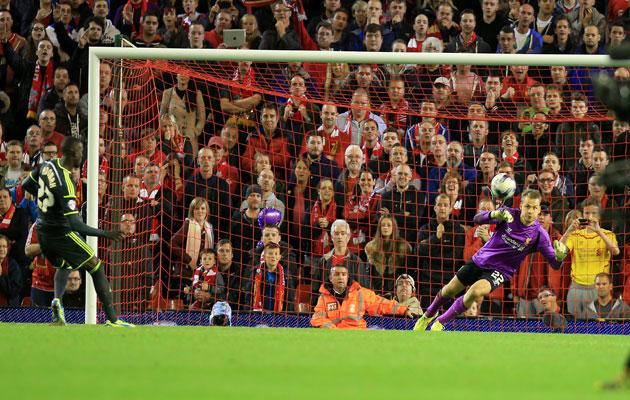 Liverpool’s 14-13 Capital One victory over Middlesbrough after a 2-2 draw, equalled the English record in professional football, set in a 2011 Football League Trophy first-round tie between Dagenham & Redbridge and Leyton Orient. On that occasion, 27 penalties were also scored from 30 attempts in Dagenham’s a 14-13 win.

Today’s Guardian has produced a list of the longest (though not necessarily the best) penalty shootouts.

They also include the worst which ended 2-1 after an astonishing 66 penalties. It should be noted, though, that this match between Mickleover Lightning Blue Sox and Chellaston Boys  was an Under-10 affair – an age when most children struggle to hit the ball 12 yards let alone past a mobile goalkeeper.

The remarkable thing about last night’s shootout was the high standard of penalty kicks – naturally a decent proportion of non-English players involved helped in this regard. Indeed, both of the misses in the first cycle of five spot-kicks came from English players (Middlesbrough’s Patrick Bamford and Liverpool’s england international Raheem Sterling).

“And at the end, when it was needed, they showed wonderful composure with some of our young players stepping up.”

Indeed, but this should not obscure the fact that Liverpool fielded 8 full internationals – 7 of whom were involved at this summer’s World Cup finals. This was hardly a scratch side sent out by Rodgers.