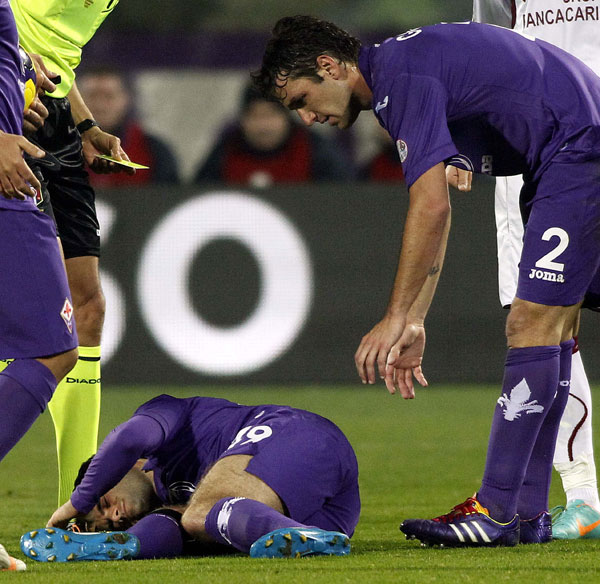 Giuseppe Rossi lies on the ground after being brought down by Leandro Rinaudo.

Livorno centre-back Leandro Rinaudo has been condemned for his reckless challenge on Fiorentina’s Giuseppe Rossi, which leaves the Italy striker facing yet another prolonged spell on the sidelines.

Rinaudo came scything through the back of Serie A’s leading scorer this season, resulting in the forward limping off and prompting fears that may have suffered a third serious knee injury in just over two years.

“Rinaudo is a hoodlum,” he said. “There are so many things I want to say to Rinaudo right now. He should look at the replays and reflect on his behaviour.”

Viola vice president Paolo Panerai added: “This is not sport. Look at Rinaudo’s reaction immediately after the foul. No apology, not even a look at Rossi.”

Fiorentina confirmed on Monday that Rossi had suffered a sprain to the knee that had already been operated on three times. An absence of two to four months is expected, although any complications could put the forward’s season and World Cup at risk.

Here’s the challenge, which appears spiteful rather than dangerous.