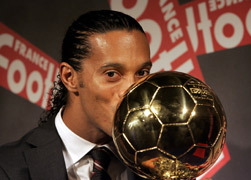 Ronaldinho has been named 2005 European Footballer of the Year.

The 25-year-old was hot favourite to claim the Ballon D’Or, having already won the 2004 Fifa World Player of the Year and the inaugural FIFpro award.

“To be here with all those great players applauding me is a dream come true,” said Ronaldinho after being presented with his award.

“This gives me motivation to keep working and try to emulate them.

“I have the chance to do for a living what I like the most in life, and that’s playing football. I can make people happy and enjoy myself at the same time.”

He has continued his good form this season and even earned a standing ovation from the Bernabeu crowd in Barcelona’s 3-0 win at Real Madrid little over a week ago.

Ronaldinho is the third Brazilian to win the award for performances at Barcelona, after Ronaldo in 1997 and Rivaldo in 1999.

The Ballon D’Or is voted for by European football journalists selected by French magazine France Football.