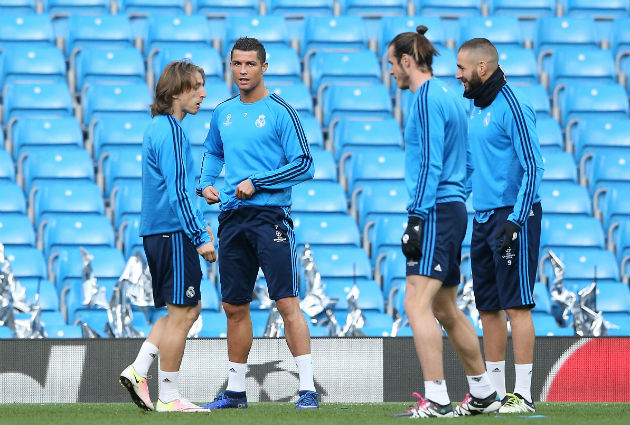 Both players endured muscular problems and their participation were in doubt – however Zidane was “100 per cent” sure that both would be fit for the clash at the Etihad.

Both players travelled to Manchester and trained with the rest of the team.

“We will test everything but the idea is that they will play.

“They have both made good progress and we will see how they are tonight. Everyone wants to play these games.”

Manchester City defender Vincent Kompany said yesterday that his side were relishing at the prospect of facing one of Europe’s giants, but Zidane acknowledged that City pose a threat to Los Blancos.

“You can prepare all you want for a big game but the game can turn out totally different than how you envisaged,” he said.

“The opponent is a great side. If you leave City space, they can hurt you in that space. The players get between the lines well. Tomorrow we will try to stop them hurting us in those areas.

“We’ve got to try and be strong defensively, because we know we are going to be put under pressure. If we can be strong and organised, I think we’ll get the chance to unleash our own weapons on the attack.”