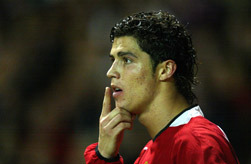 The return leg of the Carling Cup semi-final takes place at the Emirates Stadium. Click here for the latest Arsenal v Tottenham Odds!

Manchester United winger Cristiano Ronaldo has been ordered by Sir Alex Ferguson not to discuss the possibility of a move to Real Madrid.

The Portuguese international has been in inspired form for Manchester United this season, and his performances have attracted admiring glances throughout Europe.

Reports in Spain suggest Real are keen to land the player as they look to rebuild the side in the post-Galactico era.

Ronaldo was approached by Spanish journalists over the weekend, but refused discuss his future.

“I know of the interest of Real Madrid, but I can not say anything,” he told reporters from AS.

“Yesterday (Saturday), I had two chats with Carlos Queiroz and Alex Ferguson and they have forbidden me to speak about Real Madrid.

“You have to understand that because I don’t want any problems.”

The return leg of the Carling Cup semi-final takes place at the Emirates Stadium. Click here for the latest Arsenal v Tottenham Odds!