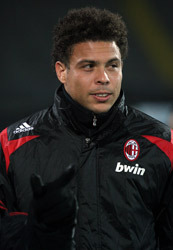 Brazilian striker Ronaldo may retire from the game following his latest serious knee injury, the 32-year-old has revealed.

Ronaldo ruptured a tendon in his left knee playing for Milan in February and made his return earlier this week when he appeared for just 22 minutes in a charity match in Morocco.

His Milan contract expired in the close season and the Brazilian has turned down an approach from Serie A midtable side Siena.

“I thank them but I really don’t know what the future holds for me,” Ronaldo told Gazzetta dello Sport.

“I don’t know if I will continue playing or retire. I still haven’t taken a decision. There is no rush. I want to complete my recuperation. I could decide tomorrow or in a month. I really don’t know.”

England’s Manchester City have been linked with a move for the 1997 and 2002 Ballon d’Or winner, along with Brazil’s Flamengo.

However, the former Real Madrid player admits he is a long way short of returning to full fitness.

“I am tired because my rehabilitation work has been hard and my legs are heavy,” added Ronaldo, who suffered serious injuries to his right knee while playing for Inter in 1999 and 2000.