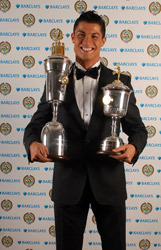 Despite missing a penalty Man Utd will be happy with the 0-0 draw against Barcelona, and now go into the 2nd-leg as slight favourites. Click here for the latest betting!

Manchester United winger Cristiano Ronaldo has been named as the Professional Footballers’ Association player of the year for the second successive season.

The 23-year-old wins the award after another outstanding campaign that has seen him score 38 goals in all competitions.

“I feel very happy. It is a great moment, it is an honour, a pleasure,” said the Portuguese winger.

Arsenal midfielder Cesc Fabregas picked up the young player of the year award.

“When you work all season to play good, to do something for the team, and then at the end of the season the PFA give you this award, it is a great motivation to carry on like that, to work more and get better,” said Ronaldo.

“I feel very good but it is not just my award, my team-mates have helped me a lot this season.

“They give me good passes to score goals – and I score – but it is a good moment for me.”

Ronaldo revealed he voted for Arsenal striker Adebayor, but believes the right man walked away with the award.

“I voted for Adebayor because I think he has had a great season as well,” he said.

“But you have many players who have had a good season – Torres, Fabregas, many players. But I think I deserve to win!”

“Football is a collective game and you prefer to win trophies with team-mates but it’s always nice to have this type of award.

“I dedicate it to my team-mates because without them I would not have won.”

Despite missing a penalty Man Utd will be happy with the 0-0 draw against Barcelona, and now go into the 2nd-leg as slight favourites. Click here for the latest betting!