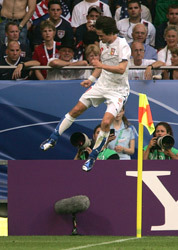 The Czech Republic cruised to a comfortable 3-0 win over USA in the opening Group E match.

Two goals from Tomas Rosicky and another for Koller secured the points, although the loss through injury of Koller in the first half took the shine off what was an impressive performance from the Czechs.

The Czech Republic took the lead with their first attack of the game on five minutes. Grygera was found in space and he produced a perfect cross for the towering Koller, who made no mistake with his header from close range.

Despite the early setback, the US regained their composure and began to assert themselves. Rozehnal collected a booking when he was forced to hack down Landon Donovan after the LA Galaxy forward burst forward in a promising position.

As the half progressed the Czech Republic were content to sit back, soak up the pressure and hit the US on the break. One such break, saw the busy Nedved almost create a second goal, but his right-footed cross from the byline was headed over by Galasek.

On the half hour mark, the US almost levelled the scores with a swift incisive break which culminated in Reyna striking the right-hand post with a drive from the edge of the area.

Rosicky doubled the lead for the Czech Republiuc with a stunning strike from Rosicky, who collected the ball 30 yards out and unleashed a wonderful strike past the helpless Kelller.

Karel Bruckner’s team suffered a setback shortly before half-time when Koller, so crucial to their style of play, went down clutching his hamstring. The injury was a huge blow for the Czechs who were already without the injured Milan Baros. Whether he plays again in the tournament remains to be seen.

There was a double substitution from USA coach Bruce Arena at half-time as he attempted to launch a comeback. Off went Pablo Mastroeni and Steve Cherundolo, replaced by Eddie Johnson and John O’Brien.

The replacements did not make an immediate impact and if anything, after the break, the Czech Republic prompted by the inventive Nedved and Rosicky, looked the likelier scorers.

On the hour mark the veteran winger Poborsky almost added a third when he volleyed narrowly wide from a Nedved cross.

Rosicky almost emulated his earlier feat when he struck the bar with another fantastic long range shot.

At the other end Johnson produced the USA’s best chance of the half, when he turned on the edge of the area and curled a powerful drive just past the post.

However with the USA finally beginning to exert some pressure, the match’s two best performers Rosicky and Nedved combined to kill the game off. Nedved sent Rosicky through on goal and the new Arsenal signing finished with a delicate chip over the approaching Keller.

On this form the Czech Republic could well be a force at this year’s finals. Although they are one of the oldest teams at the tournament the likes of Nedved and Poborsky showed enough energy in their opener to dispel the notion that this is a tournament too far.

At this early stage it looks a tall ask for the USA to repeat their feat of 2002 by reaching the last eight.