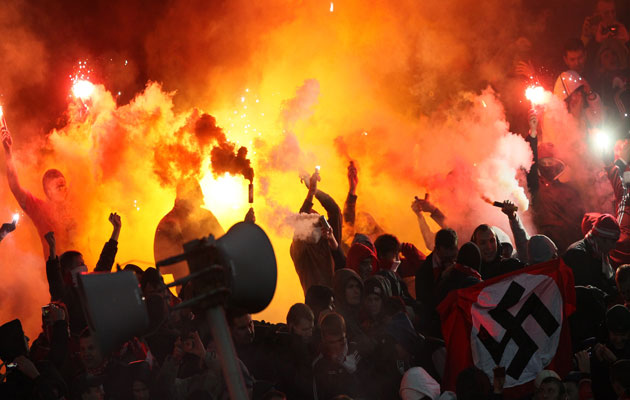 Anti-racism campaigner Piara Powar has attacked Russian football’s record on racsim after it emerged that a winner of the official Russian Premier League annual beauty pageant had posted neo-Nazi messages on social media.

The latest racism story to emerge from the 2018 World Cup hosts comes days Emmanuel Frimpong was sent off for gesturing towards abusive Spartak Moscow fans. The Russian Football Union later ruled there was no evidence to prove that Frimpong had been targeted by racists and the player’s two-match ban for being sent off was upheld.

However, officials later stripped her of the title after it emerged she had made a series of racist social media postings.

Kuzkova has shared pictures of herself wearing a t-shirt with Nazi symbols on it, while in another picture she is seen sieg heiling in front of a the numbers 14/88 painted on a wall. The number 14 refers to the 14 words in a slogan coined by David Lane, an American white supremacist. The number 88 is used as an abbreviation for the Nazi salute Heil Hitler, with H being the eight letter in the alphabet and 88 thus translating into HH or Heil Hitler.

Kuzkova’s victory prompted the anti-racist group CSKA Fans Against Racism to call for her to be stripped of her title.

“We make a call to all organizers of this contest from Russian Premier League to deprive her of the title immediately, if they are sincere in their words about “our legendary veterans and millions of victims of the Second World War,” a statement from the group read.

Sergei Cheban, the league’s executive director, told the Sport Express newspaper: “We do not tolerate manifestations of fascism, nationalism and racism. It is unfortunate that it happened. However, I beg people to understand the situation and the person. When we are young we all make mistakes, sometimes going the wrong way. Who is not without sin?

“Some errors are corrected easily, some are more difficult. I would be happy if this story will help Olga deal with her outlook on life. Olga herself told me that she was ready to give up the title after what happened, because of the shadow cast on CSKA and its fans. I replied that she did not need to be hasty, but in the end, we consulted with members of the jury and decided to withdraw the award.”

Powar, executive director of the Football Against Racism in Europe network, said in a statement: “Both the racist chants against Frimpong and the beauty pageant controversy come as a reminder that the Russian football authorities need to do more. An acceptable long-term reaction can only come through the implementation of an action plan covering all elements of racism, discrimination and far-right involvement.

“The World Cup is a global event. Hosting it means a global spotlight is focused on whoever wins the right. And Russia will continue to face questions over these issues around the world until we see some real progress.

“The discourse around the Frimpong incident shows just how far we have have to go, the blame is placed on the victim and his reaction not the perpetrators of the offence. The same happened last season with incidents involving Samba and Hulk.”