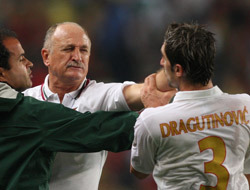 Premiership leaders Liverpool get back to league business this Saturday with a trip south to Portsmouth. Click here for latest odds!

Portugal coach Luiz Felipe Scolari has apologised for lashing out at Ivica Dragutinovic after Wednesday’s Euro 2008 qualifier but claimed the Serbian defender had insulted his family.

“I apologise to Portugal and to the Portuguese people, because I feel at home here,” Scolari said in a statement.

“It was a situation with a lot of confusion and I was only protecting my athletes,” said the Brazilian.

“Words in Spanish directed at my family, I understand perfectly well,” he said.

“As such when I reacted, it was the wrong reaction but sometimes even rational and normal people err. As such, I would like to apologise to you, to the fans, the players and to the people of Portugal.”

Both UEFA and Portugal’s Football Federation said they would also launch inquiries into the incident at the end of the Group A match, which ended in a 1-1 draw.

The melee occurred after Dragutinovic was shown a red card in stoppage time.

Dragutinovic was quoted on his club’s Web site as telling Spain’s Canal Sur Radio: “He touched me a little in the face and at that moment I saw that he was going to hit me so I stepped back. It isn’t good for football. It’s a bad example for all sportspeople.

“I forgive him, I have nothing against him, but if you win or lose you have to have the same respect for every player because you are in the world of sport. If you don’t know how to lose it is better that you leave football,” Dragutinovic said.

“I have never before seen this type of incident in my career. I am a little surprised by his reaction. I know he’s a good coach but there aren’t words to describe his reaction because I never spoke to him or anything.”

Premiership leaders Liverpool get back to league business this Saturday with a trip south to Portsmouth. Click here for latest odds!