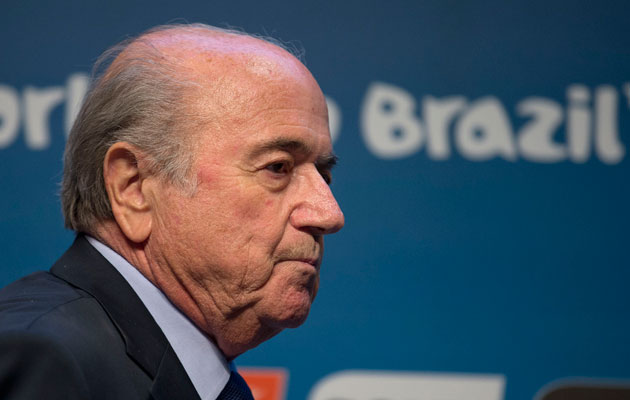 Van Praag, with his comments, indicated he had accepted the role of European challenger to Blatter at the election congress in May 2015.

This would also signal that UEFA’s own president, Michel Platini, will not stand for a role which was once considered his to claim.

Blatter, who remains the odds-on favourite, has been telling conferences of all the regional confederations here in Sao Paulo, that he is willing to stand next year for a fifth term in an office he took over in 1998 by defeating UEFA president Lennart Johansson in an election in Paris.

Van Praag, in an interview with Dutch media, said: “The image of FIFA has deteriorated after everything that has happened in recent years. Few take FIFA seriously, and no matter how you look at it, Blatter is ultimately responsible.

“The elections for the president of FIFA are not until next year but it’s good that Europe should be prepared and speak with one voice.”

Van Praag is a senior member of the UEFA executive committee.

Brazilian Joao Havelange ousted Rous in 1974 and reigned for 24 years before retiring and being succeeded by Blatter who had been his general secretary.

Blatter was a marketing manager for Swiss timing fim Longines before being hand-picked for a FIFA development role by influential Adidas powerbroker Horst Dassler in 1975. He became FIFA development director before taking over as general secretary.

Europe’s attempts to oust sitting presidents in modern times have ended in dismal failure. Italian Antonio Matarrese was run out of sight by Havelange in 1994 and Cameroon’s Issa Hayatou was roundly defeated by Blatter in 2002.

Meanwhile Blatter continued his whistle-stop tour of confederations meetings ahead of FIFA Congress, promising World Cup ‘bonuses’ to the national associations and telling them his “will” to stay on as president of the world federation “burns as strongly as ever.”

So far only one man has declared himself formally as a candidate for the FIFA presidency, the former deputy general secretary Jerome Champagne.