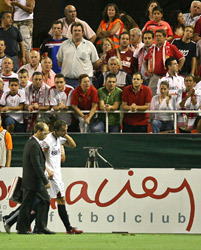 Sevilla defender Antonio Puerta has died after suffering a heart attack during his side’s 4-1 win against Getafe on Saturday.

The 22-year-old Spanish international had been in a critical condition in the Virgen del Rocio hospital in Seville since Saturday.

Puerta collapsed after jogging back towards his own goal 35 minutes into the opening league game of the season at the Sanchez Pizjuan on Saturday. He was led from the pitch but later suffered a heart-attack in the dressing room.

Doctors earlier confirmed that the condition of Puerta had deteriorated.

A medical report by Dr Francisco Murillo, head of the intensive care unit, read: “The condition of patient Antonio Puerta is not favourable due to the progression of the postanoxic brain injury and the multiple organic dysfunction caused by the prolonged cardiac arrest that led to his admission to hospital.”

UEFA had agreed to postpone Tuesday’s Champions League third round qualifier against AEK Athens and that the team’s league match against Osasuna on Monday would also be called off.

An AEK spokesman said the tie will now be played on Monday September 3.

Milan, Sevilla’s opponents in Friday’s European Super Cup, have offered to call the match off.

“AC Milan… grieve at the passing of Antonio Puerta and share the pain of our friends at Sevilla and the player’s family,” the club said in a statement. “Milan are ready to stand by any decision adopted by Uefa about the playing or not of the European Super Cup.”