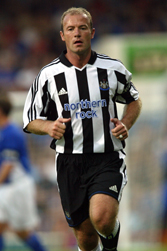 Former Newcastle United striker Alan Shearer could be ready to accept the job as the club’s manager.

The Premier League’s all-time record goalscorer has been linked with a return to St James Park since retiring at the end of the 2005-06 season.

Robert Lee, Shearer’s closest friend and confidant, said yesterday that the former England forward, who had been reluctant to swap his role on Match of the Day for a career in management, has now undergone a change of heart.

“I can honestly say, yes, Alan Shearer will manage Newcastle,” Lee told The Mag, Newcastle’s leading fanzine. “Until now I would have just said that he would one day but I finally believe that he would tomorrow if the job is how he wants it, without all the silly games going on that have killed it.”

Lee, however, believes the club’s owner, Mike Ashley, who put the club up for sale following the furore surrounding Keegan’s resignation in September, could win over the fans by appointing Shearer as boss.

“Mike Ashley would solve a lot of his problems by appointing Alan and accepting that mistakes have been made,” Lee added. “Alan could be a priceless get out of jail card. Now is the time to make the club what we all want.’

“If he doesn’t sell by January he has a problem attracting buyers. In which case he has to pull a rabbit out of the bag and make a statement of intent by making a permanent appointment and starting again. Mike Ashley has to put a top man in charge if he is going to stay. He has to create the buzz and get the fans back onside.”

“I know for a fact that Michael Owen and any top player would play for him,” he said. “We have not got European football at the moment but Alan Shearer will be a magnet for the top guys.”

Lee, who spent 10 seasons playing for Newcastle, admitted he would consider returning alongside Shearer.