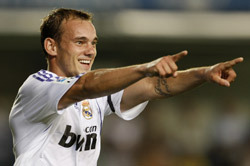 Argentina and Brazil head the betting to land the Olympic gold medal at Beijing this summer. Click here for the latest odds!

Real Madrid midfielder Wesley Sneijder is expected to endure a lengthy spell on the sidelines after suffering a serious injury against Arsenal.

The Dutchman was carried off during Sunday’s 1-0 defeat to Arsenal in the Emirates Cup and it is feared he may have suffered a cruciate knee ligament problem.

“They’ve got to do a lot of tests and right now it doesn’t look good.

“We’re going to lose him for a little bit.”

Real president Ramon Calderon admitted the injury was a major blow to the player and club.

“It’s serious and it’s the worst news we could get. He has, at the very least, torn his internal ligament,” Calderon told Spanish news agency Efe.

“He is very upset, crying because it is a serious problem and very painful.”

Sneijder is set to undergo scans on the injury on Monday to find out the full extent of the injury.

“Initial tests show serious damage to his knee ligaments, but the player will undergo complementary exams including an MRI on Monday to determine the full extent of the injury,” a club statement read.

Argentina and Brazil head the betting to land the Olympic gold medal at Beijing this summer. Click here for the latest odds!