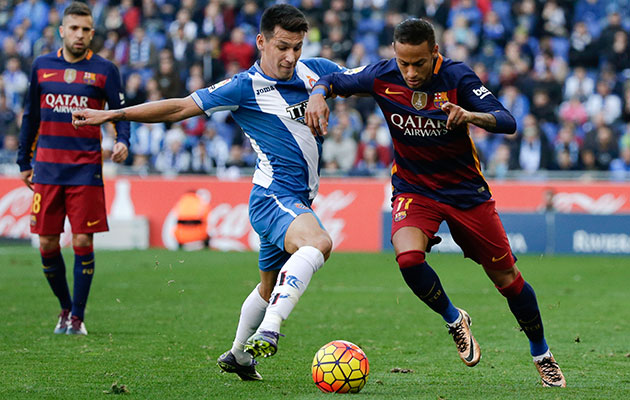 The Spanish league said it will send a report denouncing racist and abusive language by Espanyol fans during the home match against Barcelona last Saturday to the government’s anti-violence committee for sports.

Barcelona’s Brazilian striker Neymar was the victim of the alleged abuse, which the league said breached the federation’s disciplinary code prohibiting chants that “incite violence, racism, xenophobia and intolerance in sports”.

The teams played again in a fiery Copa del Rey encounter on Wednesday, when tensions escalated and two Espanyol players were sent off. Espanyol players later claimed that Luis Suarez had confronted their players in the tunnel after the match.

The Catalan rivals will play the return leg of their cup tie next week at Espanyol’s stadium.

Meanwhile, Barcelona defender Gerard Pique has done his bit to fan the flames by mocking the local rivals, claiming they cannot fill their stadium.

Pique scored Barca’s third goal in front of 76,667 supporters at Camp Nou on Wednesday, less than a week after just 28,975 fans turned up at the 40,500-capacity Estadio Cornella-El Prat for last week’s goalless La Liga draw.

“They call themselves the ‘marvellous minority’, and they’re in such a minority that they can’t even fill their ground,” said the Spain defender.

“Let’s see whether they manage to fill it for the return leg, because the other day it wasn’t full.”