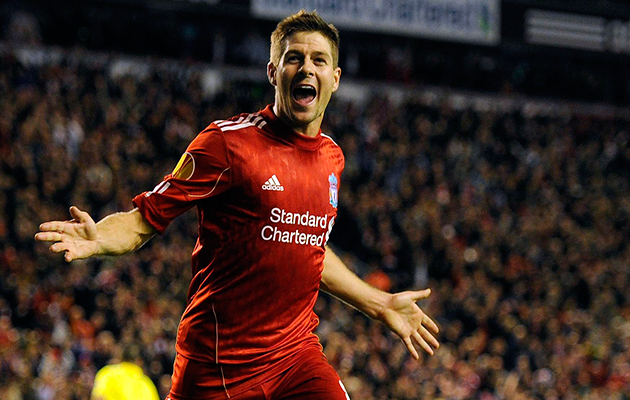 Steven Gerrard has announced his retirement, ending a 19-year playing career spent mostly at Liverpool, with whom he won the Champions League in 2005.

The one trophy that eluded Gerrard was the Premier League title, with his Liverpool side finishing second in the table on three occasions. Ironically, the closest he came was in 2013-14, when a Gerrard-inspired title charge was derailed by the now infamous ‘slip’ against Chelsea at Anfield when Liverpool eventually finished runners-up to Manchester City.

The midfielder, who led England at the 2010 and 2014 World Cups, was his country’s fourth most-capped player making 114 appearances and scoring 21 goals.

“I feel lucky to have experienced so many wonderful highlights over the course of my career,” said Gerrard.

“I have had an incredible career and am thankful for each and every moment of my time at Liverpool, England and LA Galaxy.

“I fulfilled my childhood dream by pulling on the famous red shirt of Liverpool.”

Gerrard had been linked to a job in management with MK Dons after announcing he would leave LA Galaxy, but said on Wednesday the opportunity came “too soon” for him.

On Thursday, he said he was in no hurry to make a decision about his future, but confirmed that he saw a future for himself in the game.

“I am excited about the future and feel I still have a lot to offer the game, in whatever capacity that may be,” he added.

Gerrard confirmed that he was finding it increasingly difficult to compete at the highest level and that he has chosen to hang up his boots before he became a shadow of his youthful, more energetic self.

“The way you feel on the pitch changes and over the past couple of years I felt myself slowing down a little bit on the pitch,” Gerrard said, speaking to BT Sport. “The body starts talking to you, the pains and the aches get more regular. I can’t deliver what I used to be able to deliver and as time goes on that’s frustrating.

“My last three or four months I was getting too many injuries, the games were becoming more challenging and the travel was starting to affect me. I’ve had a few moments over the past few months where I thought ‘I didn’t play that well today’ or ‘that guy got the better of me today’.

“I’ve listened to people over the years, important people in the game who I trust and have a lot of respect for, and they said to me: ‘Always go with a tiny bit left and never overstay your welcome and play on too long where it becomes embarrassing.’ I can feel that’s not too far away so now is the right time [to retire].”

Jürgen Klopp, the Liverpool manager, said in October that the club would find a place for Gerrard, who spent 17 years at his boyhood club.

“When something is announced then we will talk. It is clear that one day in the future there will something to announce, that is pretty sure too, but until then there is nothing to say,” said the German.

“The first thing you should all learn is that, if someone wants to help Steven Gerrard, stop being so excited about each step he is doing next.

“The door is always open for him. From our side, if he wants to make a different career to his former career then we want to help him.”