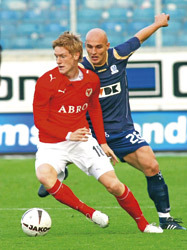 After a lengthy break, the new season in Sweden kicks off.

After the “world’s longest pre-season” (November 10 to April 3), the Allsvenskan kicks off again with 16 teams, two badly-needed new stadiums, a number of players dreaming of glory on home soil at the Under-21 European Championship in June (followed by a move abroad in July)…and two clear-cut favourites.

Elfsborg hired coach Magnus Haglund back 2004, built Boras Arena in 2005, won the league in 2006 and finished runners-up last year. And they will be hoping to go one better this time, with Brondby’s Martin Ericsson joining fellow Sweden internationals Anders Svensson and Stefan Ishizaki in what should be the league’s best midfield.

Haglund’s side boasted the stingiest defence last year (only 18 goals conceded in 30 games), but goalkeeper Johan Wiland and central defender Andreas Augustsson have both left for Denmark, joining FC Copenhagen and Horsens respectively. While buying Anders Wikstrom from Gefle might not be enough to preserve the defensive solidity, scoring should not be a problem – even if last year’s on-loan forward Lasse Nilsson is now at Vitesse Arnhem.

In Gothenburg, IFK, Orgryte and Gais finally have a new stadium. However, IFK move in without retired midfielder Niclas Alexandersson, whose calm and precise crosses will be missed. The arrival of Karl Svensson from Caen should improve an already solid defence in front of the league’s best goalkeeper, Kim Christensen, but although IFK have a young, strong team they may lack the firepower to finish above Elfsborg.

There is a long list of teams who could challenge the two front-runners…even though most probably won’t.

Kalmar won their first championship last year but are still a very careful operation. Their two top scorers, versatile midfielder Viktor Elm and forward Patrik Ingelsten, are both now in Holland with Heerenveen and have been replaced by two midfielders from relegated teams, Ljungskile’s Daryl Smylie and Sundsvall’s Tobias Eriksson, and a striker, Daniel Mendes, who did not make it at AIK. At least coach Nanne Bergstrand can still rely on the other two Elm brothers: midfielder Rasmus and forward David.

Even with Henrik Larsson in their ranks, Helsingborgs might struggle for consistency. The club’s lack of funds showed when Brazilian striker Alvaro Santos – a former Reds’ favourite who the fans still call “God” – decided to return to Sweden after a frustrating spell in France but opted to join newly promoted Orgryte, where he will be reunited with Marcus Allback.

The pair played together at FC Copenhagen and they should be able to help Orgryte stay up.
Malmo have moved into the new Swedbank Stadium, but coach Roland Nilsson has still not built a team good enough to win the title. Striker Ola Toivonen has moved to PSV Eindhoven, but Malmo’s biggest problem might be a shaky defence. New Brazilian left-back Ricardo and speedy forward Daniel Larsson from Hacken could be exciting additions, though.

In Stockholm, nobody knows what to expect from the big three after a disappointing 2008. At AIK, new coach Mikael Stahre can’t count on any major signings, but if he can keep Argentinian striker Ivan Obolo and avoid the injury list of last year, they could be a surprise.

At Djurgardens, the new coaching duo of Zoran Lukic and Andree Jeglertz have their work cut out, especially after defender Lance Davis returned to South Africa with Supersport United and forward Jones Kusi-Asare left for Esbjerg of Denmark.

Tony Gustavsson continues at Hammarby, but he could be in trouble with a team that seems to be lacking both defensively and offensively. Midfielder Erkan Zengin has joined Besiktas on loan, while two defenders have arrived: Igor Armas signed from Moldovan side Zimbru and Monday James on loan from Bayelsa United of Nigeria.

Back in 2005, Janne Andersson of Halmstads was rated as one of the most promising coaches in the game by World Soccer. Andersson is still at Orjans Vall and still developing talented young players, such as midfielder Anel Raskaj, and if he takes another step forward the team might exceed expectations.

Trelleborgs and Orebro did so last year by staying out of relegation trouble. So far, Trelleborgs have held on to defender Rasmus Bengtsson, but a good showing at the Under-21s in June could see him move on. Orebro went on a nine-game unbeaten run last autumn after forward Kim Olsen joined from Danish club Silkeborg on loan. Olsen is now a permanent fixture at Behrn Arena, while veteran defender/midfielder Sebastian Henriksson has left.

GAIS and Gefle face difficult seasons. GAIS lost key players Bobbie Friberg da Cruz to Randers of Denmark and Armenia midfielder Levon Pachajyan to Fredrikstad of Norway, while coach Magnus Pehrsson left for Aalborg. Former Orebro assistant Alexander Axan – who has the crest of his favourite team, AIK, tattooed on his arm – takes over. Gefle struggled last year and will find it even harder this term following the retirement of no less than three players.

Newcomers Hacken and Brommapojkarna don’t look like they will be able to cut it in the top tier, where two teams are relegated and the club in 14th place goes into the play-offs. Striker Olof Guterstam, who is studying to become a doctor, has returned to BP from Hammarby but he can’t be expected to save the team all by himself.