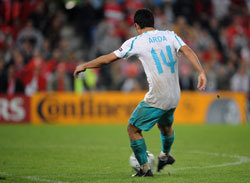 Co-hosts Switzerland are out of Euro 2008 after they went down to a 2-1 defeat to Turkey on a dramatic night in Basle.

Switzerland went ahead through Hakan Yakin, but in a game played in treacherous conditions caused by a torrential first-half downpour, Turkey hit back with second half goals from Semih and Arda Turan – the latter coming in injury time.

At one point there were fears that the game may have to be abandoned as the playing surface became virtually unplayable. Fortunately, the conditions eased in the second half and it was Turkey who were able to ride the storm.

The Turks began with real purpose and forced Switzerland on to the back foot from the kick-off. Fatih Terim’s side came close to taking the lead on 29 minutes when a Nihat free-kick was palmed away by Swiss keeper Diego Benaglio onto the head of the Arda Turan and back onto the post.

By the half hour mark the torrential downpour had made it treacherous underfoot and any attempt at passing or running with the ball appeared futile.

The game became increasingly farcical as the half wore on and Turkey’s attempt to play their short passing game became impossible as the ball was constantly held up by the standing water on the pitch.

Switzerland, with a more direct style, adapted better to the atrocious playing surface and it came as no great surprise when they went ahead. Philippe Senderos hoisted a long ball forward and Eren Derdiyok skipped past Turkish keeper Volkan Demirel before squaring across the Turkey six-yard box, the ball stopping in a puddle for Hakan Yakin to tap in from close range.

Two minutes later Hakan Yakin should have added a second when Valon Behrami found him unmarked just five yards out, but the Swiss striker sliced his effort wide of the post when it looked easier to score.

The Turkish side looked understandably disconsolate as they trudged off the pitch at half-time. Facing imminent elemination and with little prospect of the conditions improving, their prospects of getting back into the game looked slim.

Mercifully the rain abated and with the groundstaff draining the surface at half-time the conditions inproved dramatically after the break.

Turkey, relishing the better playing surface, began to string their passes together and take the game to the co-hosts.

The equaliser came just on the hour mark when Nihat curled over a wonderful cross from the left and substitute Semih rose to nod past Benaglio who got a hand to the ball but was only able to deflect it into the net.

With both asides aware that a draw was unlikely to enhance their prospects of reaching the knockout stages the game became stretched and there were chances at either end. Perhaps the best of the lot fell to Hakan Yakin whose left foot effort effort was saved by the outstretched arm of Volkan.

With seconds remaining, Switzerland pressed forward in search of a late winner, but when their attack broke down Turkey broke, with the ball reaching Arda Turan on the left wing. He cut inside two defenders and shot from the edge of the area, and the ball looped over the keeper via a deflection from Patrick Mueller.

Heartbreak for the Swiss, but joy unconfined for Turkey who now meet the Czech Republic on Sunday with a place in the last eight at stake.