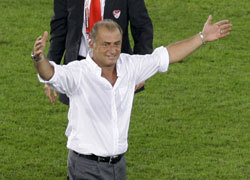 Coach Fatih Terim said his side has enhanced the reputation of Turkish football after beating Croatia on penalties to reach Euro 2008 semi-finals.

Speaking after an amazing evening in Vienna which saw his side snatch an equaliser with the last kick of the game against Croatia, before going on to win a penalty shootout, Terim believes the result confirms Turkey’s emergence as one of the great footballing nations.

“What has happened to us is unique in our history,” said Terim.

Turkey had scored last-gasp goals against Switzerland and Czech Republic to reach the quarter-finals before inflicting a similar punishment on Croatia.

“We fought and fought and the players keep outdoing themselves,” added Terim.

“We seem to always come back – we do it the hard way and that’s not easy to do. It shows just how good a team we are.

“I tell my players never to give up. I tell them that they shouldn’t be afraid of losing or conceding goals. This is football. You should never give up until the referee blows the final whistle.”