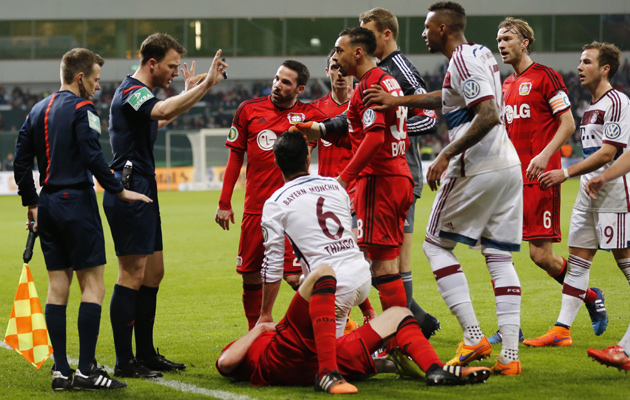 Thiago Alcantara has apologised for his kung-fu style kick during Wednesday’s DFB-Pokal quarter-final, which resulted in Bayer Leverkusen’s Stefan Kiessling being stretchered off the pitch. Astonishingly, Thiago was not shown a red card for the challenge.

To rub salt in Leverkusen’s wounds, the former Barcelona man then went on to score the winning penalty in the shootout.

Bayern won 5-3 on penalties after a 0-0 draw at the Bay-Arena to reach the semi-finals of the competition for the sixth time in succession.

Thiago, making only his second appearance since returning from a year-long absence through injury, converted the final spot kick of the evening.

The Spaniard, however, was extremely fortunate to still be on the pitch, following an appalling challenge that Bild described as a “brutal kick.”

The 23-year-old was only shown a yellow card by referee Felix Zwayer.

Kiessling, unable to carry on, was substituted for Josip Drmic, who was one of the unfortunate players to miss his spot-kicks.

“That was a clear red card — you don’t need to discuss that,” Leverkusen sporting executive Rudi Voller told reporters after the match. “That was a foul you don’t want the see on the football pitch.”

Thiago, though, said he “did not see” Kiessling when he raised his foot.

“I have apologised to him 1,000 times,” he said afterwards. “I talked to him when he was down on the ground, during the penalty shootout, and in the dressing room.”

Thiago added that he was “pumped with adrenaline” after his year on the sidelines.

Bayern CEO Karl-Heinz Rummenigge, straying dangerously close to the ‘he’s not that type of player’ defence,  added: “He is someone who would not harm a fly. The referee acted on instinct when booking him. It was an accidental situation.”