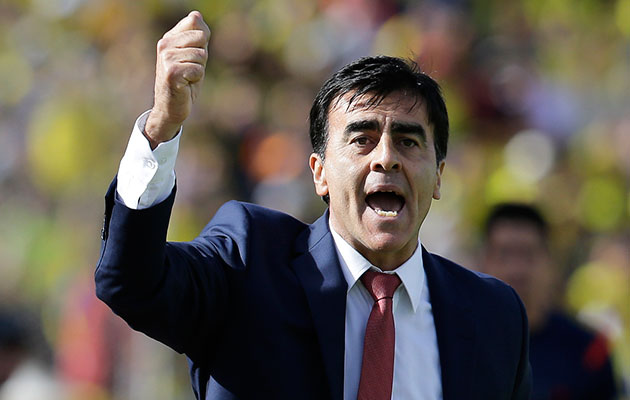 After the team lost to Brazil and Peru in the recent World Cup qualifiers, Quinteros had come under strong pressure to resign. He would not budge, and so the local FA announced via Twitter that in the light of his “indifference” when “appeals were made to his sensitivity,” Quinteros was no longer in charge of the national team. For the last two qualifying rounds, the function would be performed by another Argentinian, Jorge Celico, who recently had been appointed the country’s youth supremo.

It would seem that Quinteros had two reasons for holding firm. One is financial. By the terms of his contract, a sacking would bring him a pay off of a reported $500,000. It appears that he might be kept on the payroll until his contract runs out at the end of the year – a cheaper option.

The second reason is that, for all their recent disappointments, Ecuador still have a chance of making it to Russia. Next month they travel to face Chile – who have often struggled against the physicality of the Ecuadorians, who are themselves under great pressure and desperate for points – and who will be without the suspended Alexis Sanchez. Then Ecuador round off their campaign at home to Argentina, who traditionally despise the altitude of Quito, 2,800 metres above sea level. Two victories would probably carry Ecuador from eighth place up to fifth, the play-off position. While Ecuador are still in the hunt, argued Quinteros, why should there be a change of command?

It is a fair point. But it is impossible to look beyond the decline in results that has left Ecuador with the calculator in one hand and the phone number of the cardiologist in the other. They were the early leaders, winning all four of their first matches. But the next 12 rounds have brought them just two more wins, a pair of draws and eight defeats. So what has gone wrong?

Oscillations are inevitable in a marathon campaign played over the course of three seasons. This is especially true of a country like Ecuador, with a limited pool of talent to call upon. The big answer to Ecuador’s woes is that too many key players lost form and fitness at the same time.

This is particularly true in the centre back positions, where there is little strength in depth. Ecuador have struggled to replace Ivan Hurtado, the Bobby Moore-esque figure who held the defence together for so long. Quinteros sought to bring the defensive line higher, allowing the team to stay more compact, with his dangerous wingers receiving possession closer to the opposing goal. The problem here was that he lost the services of his senior centre back, Fricson Erazo, who ran into prolonged injury problems. He featured in the first six games, and has only played one more since then.

The little Independiente del Valle club appeared to have provided a solution in their surprise run to the final of last year’s Libertadores. There were some heroic defensive performances along the way, with impressive displays from the centre back duo, Arturo Mina and Luis Caicedo. They then formed the national team’s partnership. But Mina went to Argentina and Caicedo to Brazil. Neither move worked out, and both lost form. The quest goes on.

It has been a similar story in attacking positions. The team’s match winner, often infuriating but very hard to mark on his day, is left winger Jefferson Montero, who was in outstanding form at the start of the campaign. But, bar a five-minute substitute appearance last March, he only played in the first eight rounds before running into injury problems at Swansea. Without him the team simply do not have the same attacking possibilities. Indeed, the key moment in the entire campaign probably came last September at home to Brazil. He was giving Daniel Alves a tough time – the Brazil right back was perhaps fortunate to stay on the field. But Ecuador gave away a silly goal with twenty minutes to go, then had their right back Juan Carlos Parades sent off and went on to lose 3-0. It could have been different – Brazil looked as if they were happy with a draw.  But they have gone on from strength to strength, while Ecuador have moved in the other direction – and the absence of Montero has much to do with it. His pace also brings the best out of intelligent central midfielder Cristian Noboa, a fine passer of the ball over range. Noboa has been below par recently and will not be called up for the last two rounds.

Another important loss has been that of a Quinteros favourite, Miler Bolanos. Coach and player have an excellent track record working together, and as a support striker Bolanos was made for the role playing off the centre forward in the team’s 4-2-3-1 formation, floating between the front and the midfield line. He played in those first four wins, but then his move to Brazil was not a success. Form and fitness has been a problem and he has only featured sporadically over the past year. In his absence there has been a tendency to play Felipe Caicedo and Enner Valencia together – and apart from Valencia’s loss of form and confidence when he moved to England, having both in the same starting eleven left the team top heavy.

It is not a problem, though, that new man Jorge Celico will have to deal with. In protest at the replacement of Quinteros, Felipe Caicedo, Ecuador’s top scorer in this campaign with seven goals, has announced his retirement from international football.