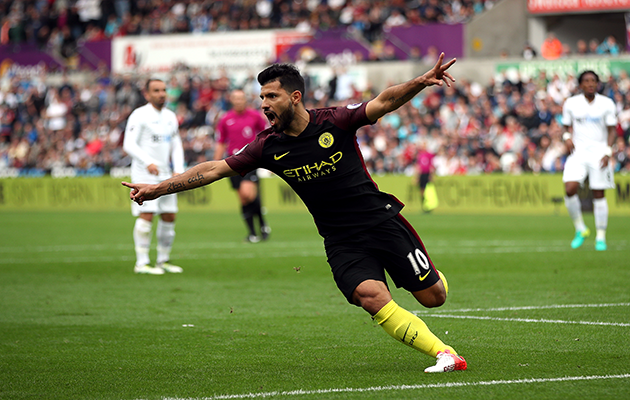 League leaders Manchester City travel to London on Sunday to face unbeaten Tottenham in what looks like being the sternest test so far of Pep Guardiola’s rapidly developing team.

Both teams were in Champions League action midweek and Tottenham return to Premier League action on Sunday with confidence boosted after a much-needed victory over CSKA Moscow.

Mauricio Pochettino’s men now face a Manchester City side who dropped their first points of the season in Wednesday’s draw at Celtic Park.

The thrilling 3-3 draw at Celtic was the first match Pep Guardiola’s side have not won this season. Nevertheless, the revered Spanish coach was even able to accentuate the positives form that result.

“But talking about the performance, the guys how they fight, it doesn’t matter the mistakes they tried until the end to win the game,” he said.

But how much that herculean effort took out of his players will be evident on Sunday when they face a Tottenham side brimming with confidence on the back of an unbeaten start to their Premier League campaign.

The two managers go back a long way, having faced each other both as players and coaches – the latter when Pochettino was in charge of Espanyol and Guardiola managed Barcelona. Then, in February 2009, Pochettino inflicted Barça’s first derby defeat in 27 years when beating them 2-1 at Camp Nou.

“We played against Pochettino as players and then as coaches. I think he’s one of the best managers in the world – I enjoy watching Tottenham,” said Guardiola.

“He’s doing an amazing job in London at Spurs. The way they play I like a lot – they’re aggressive and have a lot of quality. The basis of the team is the national team with [Dele] Alli, [Kyle] Walker, [Harry] Kane – they have a lot of quality. Last season they were there until the last couple of games for the championship.

“This year they’re playing at a high level – they’re in second position so it will be a tough game and I’m looking forward to going to White Hart Lane for the first time in my life. We will try and do our job.

“All of the fans who like football and watch football can enjoy [Spurs] – they’re proactive, not reactive. There are many teams who wait to see what you do and then react – they don’t wait to see what they’re going to do. They want to create their own game. That’s why I like them. When I saw the last game against CSKA, against Liverpool, against Middlesbrough, I like what I’m watching.”

No one has scored more Premier League goals than the 107 Sergio Aguero has netted since he arrived in England in 2011. Spurs goalkeeper Hugo Lloris will be hoping for a better day against the striker on Sunday. Eight of Aguero’s goals against Tottenham have been past Lloris, the most the Spurs keeper has conceded against a single player in his Premier League career.

Aguero boasts the most prolific minutes-per-goal ratio in Premier League history. On average the Argentinian striker scores a goal every 106 minutes and his return this season of 11 goals from six matches confirms that he’s in the form of his life. No surprise, then, that the deadly Manchester City striker is a very short-priced favourite at 4-1 to score the first goal on Sunday. For details of this and other odds for Sunday’s game, you can head to www.gamblingsites.com.

City will be without influential playmaker Kevin De Bruyne, but Guardiola, couresty of the club’s deep coffers, appears to have the resources to cope with the loss of such a key player.

Pochettino, meanwhile, is not so fortunate. He will be without striker Harry Kane, who continues to nurse an ankle ligament injury and is not due back until early November. The Argentinian has made huge strides with his energetic Tottenham side, but he acknowledges that there is still some way to go before they can hope to compete with the resources availablew to the the likes of Manchester City.

“Maybe we are a little behind them but our expectation in the long term is to compete with all the big clubs like Manchester City, Manchester United, Liverpool.

“We are building a new stadium, we have an unbelievable training ground and we want to set the principles to be a big, big club. Our spirit and ambition is to be one of the biggest in the world, but you need time and a normal process.

“It is difficult to compare Tottenham and Manchester City. You look at their budget, the salaries they pay and compare it with Tottenham, and it is very clear… we have very different projects.”

Spurs, in the absence of Kane, will be looking to summer signing Vincent Janssen to score his first goal since his move from AZ Alkmaar. But, it is the form of Heung-min Son that will be of more concern to City’s defence.

Son has seized the opportunity handed to him this season by Pochettino after the Tottenham manager turned down his request to leave the club in the summer.

The South Korea forward has already equalled his Premier League goals tally from last season with five from five matches, scoring twice in both away wins at Stoke and Middlesbrough.

Given the attacking talent on display and the positive approaches of both managers, goals should be guaranteed. A high scoring draw would appear to be the most likely outcome, a result which would please both clubs and also the pursuing pack.