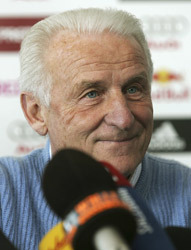 Republic of Ireland coach Giovanni Trapattoni is being treated in hospital after complaining of feeling unwell.

Trapattoni was taken to hospital in the early hours of Tuesday morning suffering from nausea.

Assistant Marco Tardelli took charge of training ahead of Wednesday’s friendly game against Argentina, and may remain in control for the encounter with the World Cup quarter-finalists.

An FAI statement read: “The Football Association of Ireland this morning confirmed that Republic of Ireland manager Giovanni Trapattoni has been feeling unwell since his arrival in Ireland on Sunday, suffering from nausea which he believes may have been caused by shellfish he ate before he left Italy.

“He has been looked after by the FAI team doctor, Dr Alan Byrne who as a precautionary measure brought him to the Mater Hospital this morning at 3am after further vomiting.

“He is in a stable condition and undergoing some tests this morning.

“Assistant manager Marco Tardelli will take charge of the squad today for training, allowing Giovanni to rest throughout the day.”