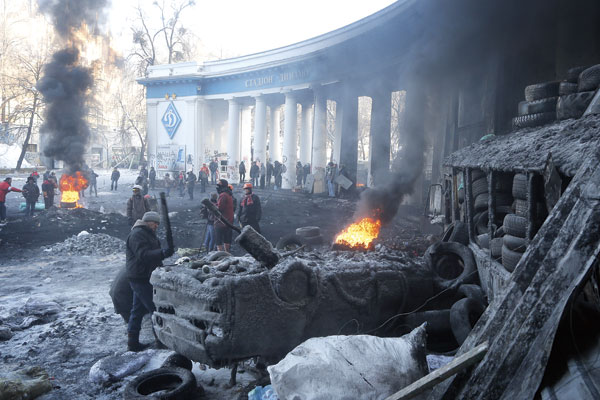 The matches will be move from the country’s Russian-leaning eastern cities as well as the Russian-occupied Crimea peninsula for security reasons.

Dynamo Kiev have moved an away game against Illichevets to Kiev from their opponents’ home town of Mariupol and the capital has also officially been confirmed to hold the match between Sevastopol and Metalist Kharkiv.

Sevastopol city authorities in the Crimean peninsula, annexed by Russia in March, prohibited the match on their territory due to the unstable political situation.

Officials from Kharkiv have also asked the Ukrainian Football Federation (FFU) to move the Ukraine Cup final, scheduled for May 15, elsewhere due to a high risk of violent clashes. The semi-finals are to be played today, with holders Shakhtar Donetsk away to Slavutych Cherkasy, and Dynamo Kiev hosting Chernomorets Odessa.

“Safety of supporters is of primary importance for us. Having received the letter from the police force, the Football Federation of Ukraine is calling for a meeting to reconsider venue options for the Cup final,” FFU spokesman Pavlo Ternoviy was quoted as saying.

Police in Lugansk have asked FC Zarja to find an away venue for their game against league leaders Shakhtar Donetsk with pro-Russian separatists causing trouble in the eastern city.

Last week’s clashes in Odessa between rival demonstrators that led to over 40 deaths were reportedly sparked partly by a rally by local Chornomorets fans whose team were due to play Metalist.