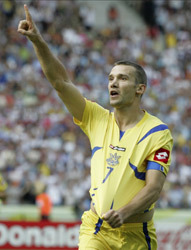 Ukraine are through to the second round after grinding out a 1-0 win over Tunisia in a dismal encounter Group G in Berlin.

Tunisia’s cause was not helped by the first-half dismissal of Jaziri, although even with a full complement Roger Lemerre’s side never looked like overcoming an obdurate Ukrainian defence.

Tunisia also named an unchanged side for a match that they had to win to have a chance of reaching the next phase.

With the stakes being so high, perhaps it wasn’t entirely surprising that the match in the opening minutes was a scrappy affair. Neither side was showing any fluency and in the early stages the busiest person on the pitch was the referee who frequently had to halt play as the game was beset by a series of niggly fouls.

The best chance fell to Tymoschuk who shot when he would have been better advised squaring to the unmarked Shevchenko, and his effort was parried easily by Boumnijel.

Shevchenko had a good opportunity to open the scoring when he was put through on the half-hour mark, but the Milan striker dwelled allowing Jaidi to clear for a corner.

At the other end, Chedli had Tunisia’s first opening but he sliced his shot wide from 12 yards.

Tunisia suffered a huge blow on the stroke of half-time when Jaziri was sent off for his second bookable offence after bringing down Anatoly Tymoschhyuk.

With 45 minutes to play Tunisia faced an uphill battle, and on the evidence of the opening half, it was a battle they looked destined to lose.

After the break, the standard of play was, if anything, even worse than the dire opening period. Passes went astray, goalscoring chances were non-existent and the abysmal fare on offer was greeted by a crescendo of boos from the restless spectators.

The closest either side came to a goal was when Ayari’s free-kick just cleared the Ukrainian bar, but that was a rare oasis of excitement in a desert of mediocrity.

Tunisia’s slim hopes of qualification receded further with 20 minutes remaining when Shevchenko tripped over his own foot, but the referee who was someway behind the play, pointed to the penalty spot. Up stepped the Ukrainian skipper to convert the resulting spot-kick.

Voronin had a great chance to double the lead in the closing minutes when he collected a return pass, but with just Boumnijel to beat, he fired straight at the keeper. In injury time Dos Santos almost earned a point for the African side but he headed just wide from close range.